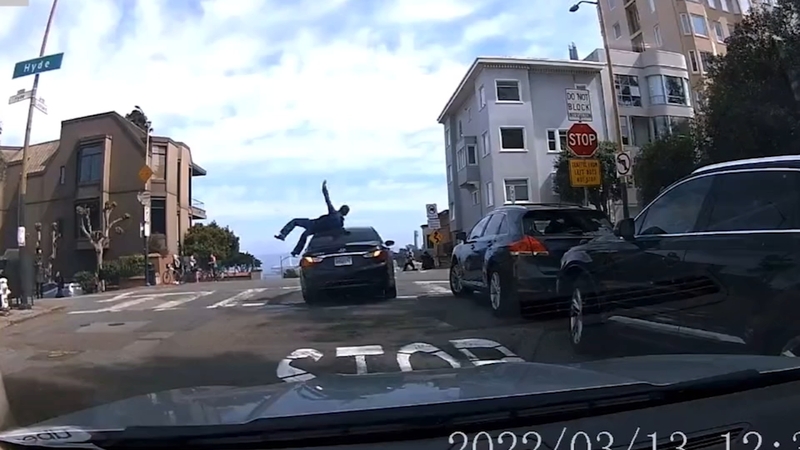 SAN FRANCISCO -- This isn't a dramatic Hollywood movie, it's a man trying to stop an auto burglary at a popular tourist destination in San Francisco, California, who gets hurt in the process.

Our sister station KGO-TV first obtained this exclusive dashcam footage hours after the incident around midday Sunday. San Francisco police confirm they responded to Hyde and Lombard Streets regarding a report of suspects breaking into vehicles.

Officers arrives on the scene and the vehicle fled the scene.

In the dashcam video from a witness, you can see a man, running toward the suspect's vehicle and jump onto the hood. The suspect vehicle quickly drives off and the man is flung into the street, appearing to his hit head on the pavement.

𝗖𝗿𝗮𝘇𝘆 𝗛𝗶𝘁 & 𝗥𝘂𝗻 𝗖𝗮𝗿 𝗕𝗿𝗲𝗮𝗸-𝗜𝗻 + 𝗖𝗵𝗮𝘀𝗲:
⠀
A man runs over to what could be his SUV getting broken into, runs ONTO the hood of the susp vehicle and rolls off into the street, hitting his head
⠀
Then you see a PD cruiser follow the suspects.#SanFrancisco pic.twitter.com/OjOnbQ1UqT

A police cruiser can be seen seconds later driving behind the suspect vehicle.

The man was transported to the hospital with non-life-threatening injuries. Two male suspects in that suspect vehicle are still at large.