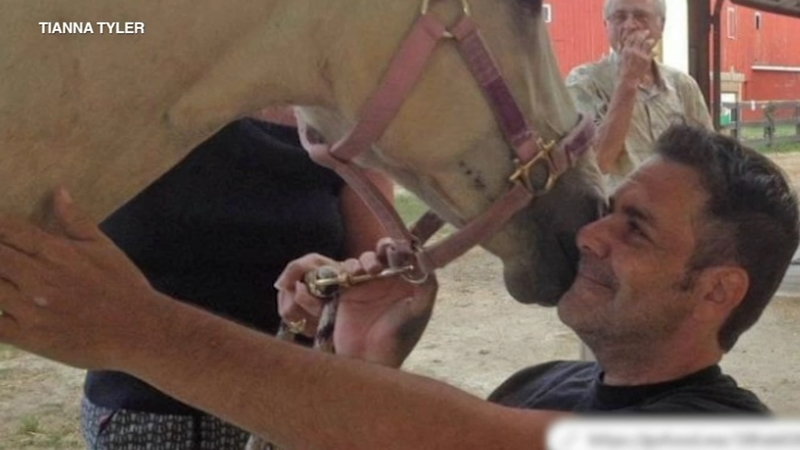 Man in wheelchair in ICU after Mount Prospect hit-and-run: family

MOUNT PROSPECT, Ill. (WLS) -- A 54-year-old man struck by a hit-and-run driver Wednesday in Mount Prospect was going to visit with his 94-year-old father, but never made it, according to his family.

Marc Giolli was on his way home to go for a walk with his elderly father just before 2 p.m. Wednesday when he was hit, his sister Mary Tyler said.

The beloved brother and son is still fighting to survive. His family spoke exclusively to Eyewitness News about the crash and his difficult recovery ahead.

Witnesses told investigators that someone driving a black Chevrolet hit a person in a wheelchair who was crossing the street.

"He's just got a huge heart. He finds the good in everybody and he just wants to help people," Tyler said.

Giolli, who has spina bifida and is paraplegic, uses a wheelchair. He was trying to cross the 1300-block of Elmhurst Road, going to see his dad, when a dark-colored Chevrolet hit him and didn't stop.

"His arms are just full of road rash. A gash on his head, I guess he hit the windshield, " Tyler said.

Giolli was left with a broken pelvis and ribs, shattered knee, a punctured lung, and a deep head wound with internal brain bleeding. Bystanders stepped in to help, guiding traffic around the badly-injured man.

"He was breathing, but he wasn't moving so, my roommate kept directing traffic and that's all we could do," said witness Bobby Hansford.

Tyler said her brother and their father are close. They live together and take care of each other.

"(I'm) so glad someone was there. I mean, I was a block away and didn't know what was going on. I could have been there in a minute," Tyler said.

A hit-and-run driver struck a person as they crossed the street in a wheelchair in northwest suburban Mount Prospect Wednesday afternoon, police said.

Giolli's family set up a GoFundMe account to help pay for expenses. They're now wondering what the future holds for their beloved brother and son.

Mount Prospect police identified the driver as a 22-year-old woman.

"How do you recover from that yourself? That's really young. That's hard. She was probably scared to death," Tyler said.

According to the family, Giolli is still in critical condition at Advocate Lutheran General Hospital in Park Ridge.