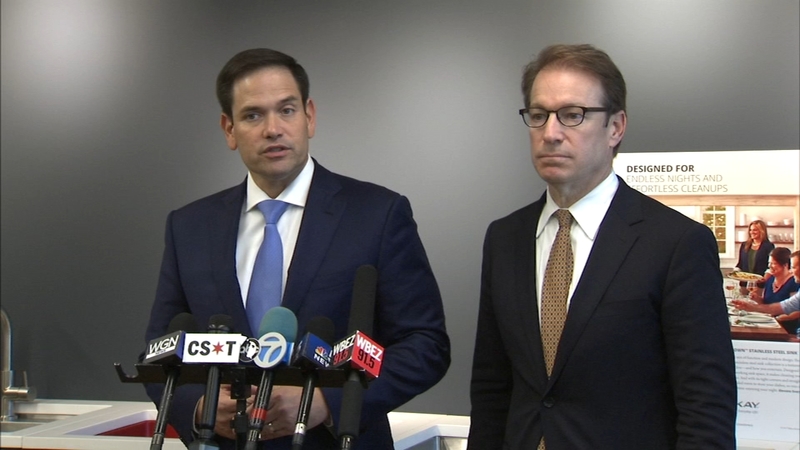 OAK BROOK, Ill. (WLS) -- A top Republican senator offered some campaign support on Monday for Illinois Congressman Peter Roskam, who is in a battle to keep his seat representing the 6th Congressional District.

U.S. Sen. Marco Rubio, R-Florida, was in Oak Brook to fundraise for six-term Roskam, who is being challenged by Democract Sean Casten.

The 6th Congressional District covers the west and northwest suburbs.

Outside the closed door event in Oak Brook, protesters voiced their opposition to Roskam for his vote against the Affordable Care Act.

Casten focused on gun control, saying in a statement that, in the wake of Saturday's synagogue shooting in Pittsburgh, "It's honestly galling that Peter Roskam is taking the time to fundraise with the NRA's 6th highest beneficiary in the U.S. Senate Marco Rubio."

Both Roskam and Rubio do not support an assault weapons ban.

"The most effective way to prevent attacks is to identify these people before they take action and to stop them, red flag laws," Rubio said.

Roskam said he invited Rubio because they are similar politicians - both calm civil lawmakers who are not afraid to reach across the aisle.

"I think the 6th District is interested in sending a representative to Congress that reflects them he doesn't add rhetorical gasoline into the incendiary public debate," Roskam said.

While Roskam called for civility and blames Casten for adding rhetorical gasoline, he began his press conference with showing a new attack on Casten and continued to blast his opponent.

As for anger and rhetoric coming out of their party leader President Donald Trump, Rubio said both parties are too blame.

"If you want to become famous in American politics say outrageous things and people will notice," Rubio said.

Rubio is not the only outside politician who has come to Roskam's aide.

House Majority Whip Steve Scalise, a Republican from Louisiana, was in Chicago for a Roskam fundraiser a couple weeks ago.