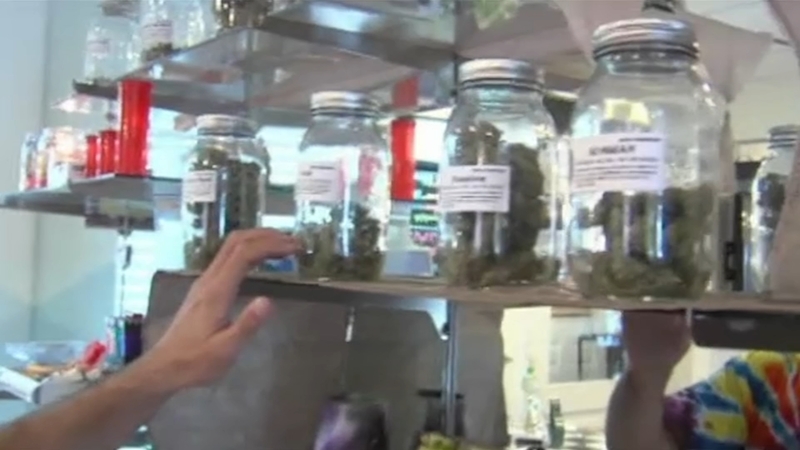 CHICAGO (WLS) -- Starting January 1, recreational marijuana dispensaries will be in business across Chicago. But there will be certain restrictions on where they can open up shop.

The subject was a hot topic at Wednesday's Chicago City Council meeting, where an ordinance governing the new business was debated. It passed 40-10 with the mayor's support.

In victory, Mayor Lori Lightfoot said, "I will be your partner in joining and addressing equity issues" related the issue.

Chicago's new cannabis zoning ordinance restricts recreational sales to places outside the city's Central Business District. The City Council's Black Caucus was split on the issue. Members demanded assurances that minority ownership of cannabis dispensary licenses would be part of the ordinance. They lost.

"Jails have been filled up, people have been locked up," thundered 9th Ward Alderman Anthony Beale on the council floor. "And now we are being locked out of benefiting from this particular ordinance."

Another no vote came from 17th Ward Alderman David Moore.

"This thing only comes once in a lifetime," he said. "Almost where we can gain some ground finally in the city as African-Americans."

Beyond downtown, the rest of the city is divided into seven zones with 13 marijuana retail locations permitted in each. As it stands, 11 medical marijuana license holders will be able to pivot into recreational sales at the start of the new year. None are minority-owned.

"Here we are with an industry being rolled out and we can't get nothing out of this ordinance. Something is wrong with that picture, ladies and gentlemen," he said.
But supporters of the ordinance said its restrictions on where dispensaries can be set up were what the political moment demanded now.

Black Caucus chair 29th Ward Alderman Jason Ervin shared many of the concerns of the ordinance's opponents, but eventually voted for the zoning restrictions at the heart of legislation.

"I encourage us to have a zoning framework that most of us have agreed to and understand and we will deal with the issue of equity," he said.

The state cannabis bill Governor JB Pritzker signed into law allows adults aged 21 and over to buy up to 30 grams, or about 1 ounce, of marijuana flower, edibles totaling no more than 500mg of THC, and 5 grams of cannabis concentrate products. Non-residents will be able to purchase half those amounts.

Some supporters of the ordinance remained sensitive to minority community concerns, especially from the African American and Latinx communities.

Outside council chambers Ald. Ervin sought to downplay the idea equity issues would never have a better chance to be part of Chicago's new cannabis business.

"We just do not want these things sited in places where our community does not want them," Ervin said. "And we need to have some form of zoning process to deal with that."