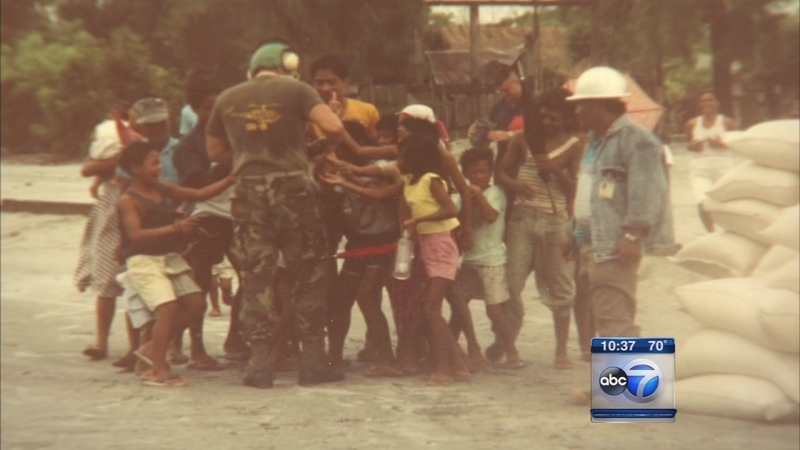 CHICAGO (WLS) -- A Marine Corp helicopter squadron once based in north suburban Glenview is finally recognized for saving lives in the Philippines in a mission 23 years ago and this weekend, the long-overdue awards ceremony took place at the Filipino consul general's office in downtown Chicago.

June, 1991. Marine Reserve Squadron HML-776 was having a great time in the Philippines as Mount Pinatubo barely sputtered nearby.

"I remember having a few beers with my officers, singing, 'Where will you go when the volcano blows,' by Jimmy Buffet, and just having a blast, never once realizing we were about to embark on an eight-week nightmare," said then-Lt. Col. Robert Monfort, HML-776 Commanding Officer.

"I considered it a tropical paradise and overnight it was like paradise to the moon, gray and ash, and rubble," said then-Sgt. Sean McDonald, HML-776 Crew Chief.

And it got worse. One hundred and four Marines with six Huey helicopters were now on a mission.

"The rocks were coming down and they started getting bigger and bigger, and I came in and I said, 'There's going to be some people who die today, let's all get prepared,'" said then-Maj. Tom Hayhurst, HML-776 Operations Officer.

The devastation was widespread and the Filipino people needed help.

"We went out, grabbed some shovels, started digging out the town, because at least we had our equipment, the towns folks had no equipment," said then-Cpl. James Villa, HML-776.

Once the helicopters were airborne, the squadron flew live-saving supplies to stranded communities.

"Just landing there and seeing these kids and them reaching out for water and knowing how hungry they are and throwing this rice out, there are no words to describe it," Sgt. McDonald said.

"It was bittersweet, in that our squadron rose to the occasion, but it was so sad for the people of the Philippines," Lt. Col. Robert Monfort said.

"It's a job that needs recognition, it's a recognition that must be put on the record," said Generoso D.G. Calonge, Philippine Consul General - Chicago.

"I think in our hearts we all know what we did, but it's always nice to receive a nice Atta boy or Atta girl," Lt. Col. Monfort said.

Along with a reunion, and a group photo, it is a moment they celebrate, while remembering those days 23 years ago.

"I'm humbled to be part of this group and even after 23 years, it's so great to see them and it's a lot of great memories," Sgt. McDonald said.

So why did the ceremony take so long? Essentially it fell through the cracks as other troops returned home from the Persian Gulf War, and some bases, like Glenview Naval Air Station, closed down. This weekend was finally the squadron's day.