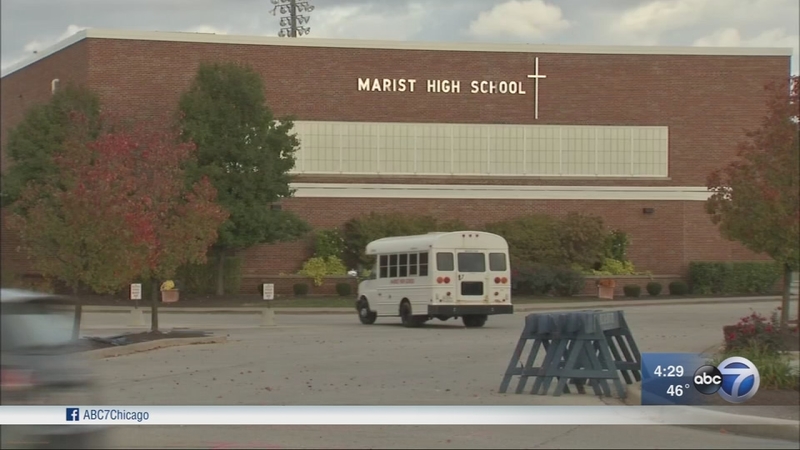 Marist student activists meet with officials after threats of violence

CHICAGO (WLS) -- Chicago Public School students, with their parents, met with officials and administrators including Chicago Police Supt. Eddie Johnson after Marist High School was closed Friday because of a threat of violence at the Catholic school.

A Black Lives Matter protest was planned at Marist for Friday, in the wake of controversy and tension following a social media post that exposed some Marist students using racial slurs in a group chat.

After messages were posted threatening the protesters, organizers decided to cancel the event.

"Residents of Mount Greenwood threatened to shoot children on sight. They called City Hall and the mayor and also CPS, to the point where CPS called us and told our parents we are not safe," said one student.

"We're really ready for a change and to make things happen," another student said.

"From this point forward, we'll continue to have dialogue with those young ladies and try to ensure that everybody is in a safe place," Supt. Johnson said.

The chat that began the series of incidents was about the shooting death of Joshua Beal by a police officer.

Police said Beal was killed after he pointed a gun at an off-duty officer, and others, during a traffic dispute last weekend in Chicago's Mount Greenwood neighborhood.

School officials said they know about the posts involving racial slurs, and that the students involved face disciplinary action. Thousands of people signed a petition, hoping to overturn the punishment against the five students.

ABC7 Eyewitness News was told Marist also canceled classes to students wouldn't be confused about whether or not a protest was expected.

Mount Greenwood residents, like Sarina Gutierrez, said they understand the protests, but still want there to be peace on both sides:

"I do think they have their reasons. I just hope it's peaceful and not dangerous and they don't bring violence into it and everything is peaceful," Gutierrez said.