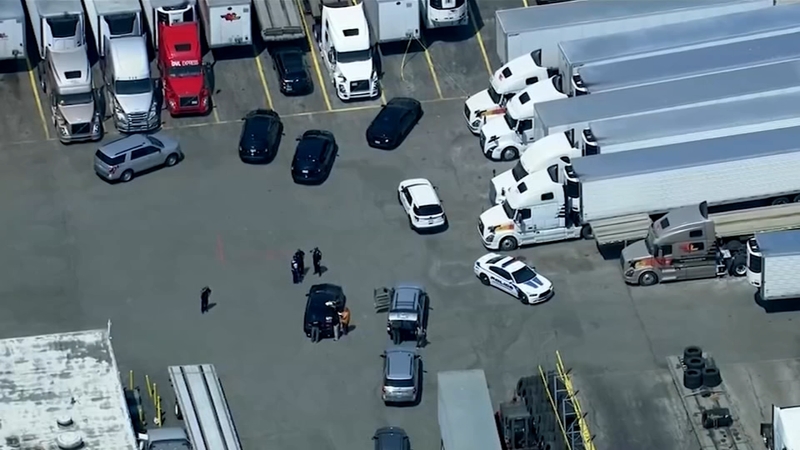 MARKHAM, Ill. (WLS) -- A police call for trespass at a trucking company in Markham ended with a man shot and in critical condition at Christ Hospital.

Ten officers responded to trucking company DVL Express in Markham, blocking off the area after a morning trespassing call. When officers arrived, Markham Police Chief Terry White said they saw an employee of DVL in mental distress, harming himself with knives.

"The subject then turned the knives onto one of my officers and she was forced to defend herself for the protection of herself and the other officers involved," White said.

White said the female officer shot the man. He was taken to Christ Hospital.

The officer was unharmed.

"We're trained for every possible scenario, but it's impossible. The fraction of a second it takes to change that scenario, we need additional resources and help for that," Chief White said.

Nacole Brown, who lives across from where the shooting happened, said she heard shots ring out.

"Ten officers respond to the scene and no one has a clue how to get this knife from this man without no one being harmed. And that's sad," she said.

Brown said there needs to be better police training or mental health professionals involved in calls where a person is in mental distress.

"You gotta do better by your position than what you're doing and showing us today," Brown said.

More resources are something Chief White said he welcomes.

"If we had someone like a mental health expert here to help us, I would welcome them. Please go to our calls with us," he said.

Chief White said at last check the man who was shot is in critical condition. The officer who shot him is on administrative leave.

Illinois State Police said they're investigating the officer's use of force.