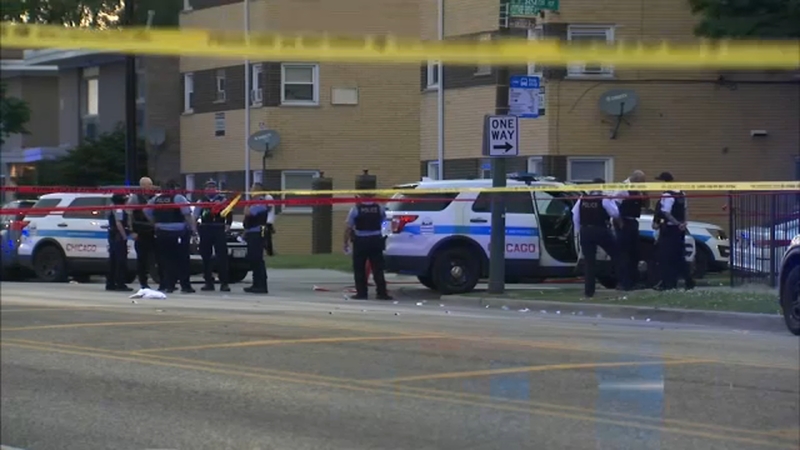 CHICAGO (WLS) -- At least five people have been killed in Chicago and 44 others injured in shootings since Friday night, according to police.

That number includes a Sunday morning mass shooting in the city's Burnside neighborhood.

Shell casings and crime scene tape line the street, marking the spot where at least 8 people were shot around 4 a.m. after dozens of gunshots were fired into a crowd at a party on the city's south side.

"There were a lot of people and a lot of shooting, so they did not know where to run or where to hide," said Street Pastor Donovan Price.

Price said he was listening to calls over the police scanner and went to the scene on 89th and Cottage Grove.

"There were people coming up that were shot in the leg, and this and that," Price said. 'Some people even shot and walking around. It is so chaotic. Everyone is looking for people. What hospital did they go to?"

Investigators said the shots were fired from a silver sedan.

Six men and two women are among the wounded.

More than half of the people injured are in serious to critical condition.

"There was one girl who was just crying all the time and saying she needed a phone. Can not call for a ride or call my mom," Price said. "She said she heard bullets going past her head."

The mass shooting is one of several crime scenes across the city.

'This is just the intro," Price said as the city prepares for the summer months.

Community leaders gathering Sunday afternoon at an anti-violence rally with the goal to have at least one summer day without any crime.

They are launching a youth mentorship program focused on making change and curbing crime.