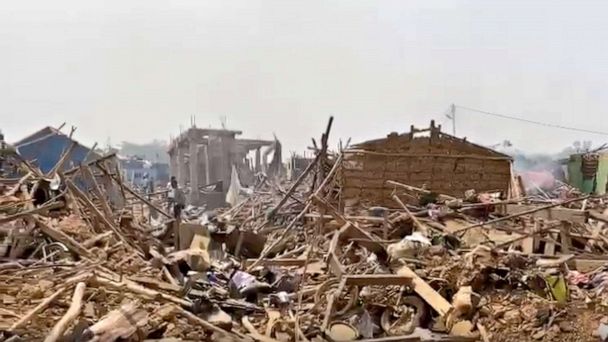 A town in Ghana was rocked by a huge explosion Thursday that sent several people to the hospital, the authorities said.

The Ghana Police Service announced that the explosion took place around 3 p.m. local time in the town of Appiatse, between Bogoso and Bawdie. Buildings and structures were gutted, and debris was scattered in the streets.


A preliminary investigation has determined that the explosion appears to have been caused by a mining vehicle carrying explosives, traveling from Tarkwa to the Chirano mines, colliding with a motorcycle, police said.

"The public has been advised to move out of the area to nearby towns for their safety while recovery efforts are underway," police said in a statement.

First responders and residents scrambled to find victims, with some using construction vehicles to clear debris. Smoke from the explosion could be seen miles away.


Police said victims had been taken to area hospitals but didn't provide any details on the number of victims or the extent of their injuries. The number of fatalities isn't immediately known.