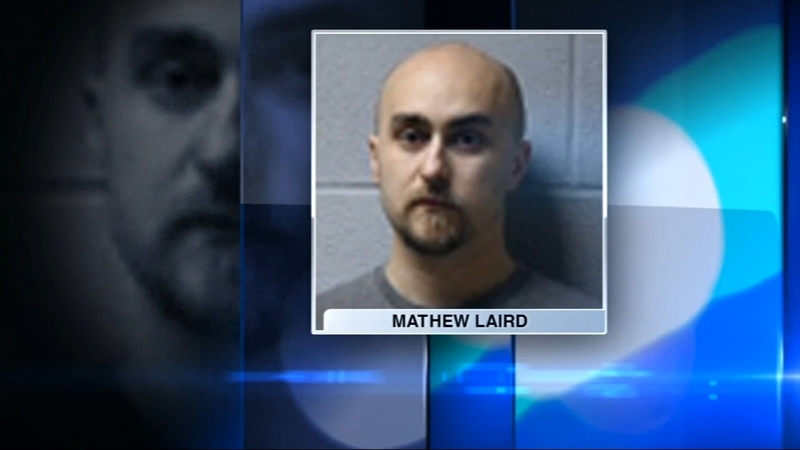 Mathew Laird, 32, was arrested at his Glenview home Tuesday after an investigation by the Glenview Police Department and the Cook County Internet Crimes against Children Task Force.

Investigators received a tip from the National Center for Missing and Exploited Children about someone uploading child pornography to a website used for sharing adult pornography. Police said that investigators identified Laird based on subscriber information of the IP address used to upload the images.

A search warrant was executed at Laird's home in September 2018 and seized a laptop and two flash drives containing several hundred pornographic images and videos of minors, police said.

"These images and video are of children as young as 3- and 4-years-old," said Andreana Turano, Cook County State's Attorney's Office.

Investigators also said that Laird committed two criminal sexual assaults, with one being a juvenile student at the time of the incident.

During his teaching career, investigators said Laird had sexual contact with a female student multiple times, including on school property.

"During this time period, the defendant often provides alcohol and repeatedly told the minor victim not to let anyone know about the sexual relationship because of the position of trust and authority he had over her," Turano said.

Laird appeared in court for the first time Wednesday and was ordered held without bond.

Anyone with further information on the case is asked to contact the Glenview Police Department at their tip line 847-901-6055 or email to gpdtipline@glenview.il.us.

In a statement, Loyola Academy said:

Mr. Laird taught at Loyola Academy from 2011 to 2014 and was a scholastic bowl moderator from 2004 to 2008 and 2010 to 2014. After being informed of an investigation by the Glenview Police Department (GPD), Loyola contacted individuals who attended the school when Mr. Laird was an employee, informed them of the investigation and urged anyone who had relevant information to contact Detective Jamie Medina at 847.901.6145.

At this point, it is unknown to us whether or to what extent any former Loyola student has been impacted, but we are continuing to cooperate fully with the Glenview Police Department in its ongoing investigation of this matter.

The safety, security and well-being of our students are our highest priorities. Loyola has numerous programs and personnel in place to ensure student safety. For additional information, please visit the Protecting and Caring for Our Students section of our website: goramblers.org/protecting-students.

A former North Shore Academy and Loyola Academy has been charged with criminal sexual assault and possession and dissemination of child pornography, Glenview police said Wednesday.

We have no confirmation at this time that any North Shore Academy students are involved in this. Mr. Laird has taught other places. From the minute we learned of this investigation, we have worked closely to provide computers, photos, personnel files, etc. to aid the police. At this time, we have NO information that confirms that North Shore Academy students are involved. We are continuing to cooperate fully with the police.

As I mentioned in my last communication, upon first learning that Mr. Laird was under investigation for what was initially characterized by police on September 18th as "internet crimes against children," we immediately banned him from our campus and placed him on administrative leave. Due to the fact that he chose not to participate in our internal investigation of this matter, his employment was terminated at the October 10, 2018 NSSED Leadership Council meeting.

We suggest that parents of NSA school students discuss this matter with your child directly so they hear from you about Mr. Laird's arrest. As always, therapists and staff will be available to provide support to students.

We understand that this news is concerning. Please know the safety and security of our students, staff, and schools is and always will be our top priority. We conduct fingerprint-based criminal background checks and cross-referencing of state and national sexual and violent offender registries as a part of our pre-employment process.
We are committed to working with our parents to support their children's learning needs and to address any questions or concerns about their experience at NSSED.

If you have information that may be relevant to the ongoing law enforcement investigation of this matter, please contact Detective Jamie Medina at the Glenview Police Department, 847-901-6145."

"We are writing to inform you about a serious matter that may have impacted the safety and well-being of some of our students.

Today, the Glenview Police Department charged 32-year-old Mathew Laird with the following: criminal sexual assault (position of authority), criminal sexual assault (non-consensual), possession of child pornography under 13 years old, dissemination of child pornography under 13 years old, and non-consensual dissemination of private sexual images. The charges are related to an investigation by Glenview Police Department detectives who are members of and working in conjunction with the Cook County Internet Crimes Against Children Task Force.

He was dismissed from his teaching position at North Shore Academy in Glencoe earlier this month, and previously taught at Loyola Academy in Wilmette.

Detectives served a search warrant at Mr. Laird's residence in September, in which several electronic devices were seized. Detectives located both pornographic and non-pornographic of current and former female high school students. Detectives are attempting to identify these female students.

We are cooperating with the Glenview Police Department as it investigates whether any of the criminal activity connected to Mr. Laird occurred with Stevenson students or on our property. Although we received no complaints or concerns about Mr. Laird during his time with the Scholastic Bowl team, we are committed to assisting Glenview police in determining whether his alleged actions involved any our students.

If you have any information that may be helpful with this investigation, please contact the Glenview Police Department Tip Line at 847-901-6055, or its Tip Line email at gpdtipline@glenview.il.us.

Most importantly, some of our students might find this news upsetting. Please keep a watchful eye out for any students who are upset and let them know we are here to support them. If they would like to talk with someone, please direct the student to their counselor and/or social worker."
Report a correction or typo
Related topics:
highland parkglenviewwilmettechild pornographysexual assault
Copyright © 2022 WLS-TV. All Rights Reserved.
TOP STORIES
1 killed in 10-vechicle crash on I-294 in Glenview
Alderman Michael Scott resigns to join Cinespace
Man fatally stabbed on train between Clinton, LaSalle Blue Line stops
Evanston senior denied graduation walk for Native regalia on cap
Truck driver killed after being hit by Metra train in Hainesville ID'd
Shooter who caused Texas school lockdown in custody, police say
Minnesota mom charged with killing son; body found in trunk
Show More
11-month-old 'Mayor of the NICU' leaves suburban hospital for 1st time
Heard rests case at libel trial without calling Depp
NFL QB Dwayne Haskins legally drunk when he was hit, autopsy shows
Imani, Monty and Rose's 2021 chick, spotted at Montrose Beach
Planned Parenthood of Illinois offering abortion pills through mail
More TOP STORIES News