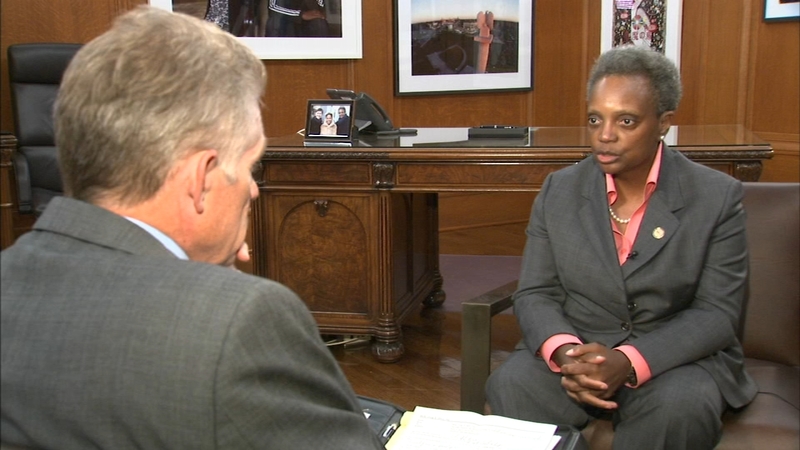 CHICAGO (WLS) -- Tax weary Chicagoans could be in for another blow to their wallets.

As Mayor Lori Lightfoot prepares to mark her first 100 days in office Wednesday, she is also hinting about her budget plans.

ABC7 Chicago sat down for a one-on-one interview with the Mayor who discussed property taxes.

Another hike in property taxes may be the last thing homeowners in Chicago want to hear after they were recently raised under Rahm Emanuel, but Mayor Lightfoot said due to the city's current financial crisis, it's a possibility.

"One of the things I'm most proud of is ethics reform," Mayor Lightfoot said. "Obviously we eliminated aldermanic prerogative and we've done a series of reforms particularly around City Council, outside employment."

Mayor Lori Lightfoot is brushing off critics who say she has not kept many of her campaign promises as she approaches 100 days in office.

However, with the positives comes the painful reality of the city's financial crisis fueled by looming pension liabilities of nearly $30 billion.

On Thursday Lightfoot will tell Chicagoans how she plans to address it.

"I've heard people who say I am being crushed by property taxes. I know that people have gotten new assessments that are 50% higher. Property taxes are the last thing in the world that I want to use as a lever but at this point in good conscience I can't take anything off the table," Lightfoot said.

"She's facing a budget deficit in her first year of about $1 billion," said Director of budget and tax research for the Illinois Policy Institute Adam Schuster. "Over the next few years there are two options: property tax hikes or constitutional pension reform.

"I'm willing to do the right thing. That's what people elected me to do and I'm not going to kick the can down the road. I'm going to be open and transparent about what our challenges are, and I'm going to make sure that we do the right thing," Lightfoot said. "I'm not going to be afraid to call it as I see it. We know the answers to solving our pension crisis, we know what needs to be done, what's been lacking is the political will, and I stand ready to wear the jacket to make sure that we do what's necessary."
Report a correction or typo
Related topics:
politicschicagolori lightfootchicago mayor election
Copyright © 2022 WLS-TV. All Rights Reserved.
TOP STORIES
Update on Delphi murders: New docs say crime scene tampered with
Chinese plane crash that killed 132 possibly intentional: US officials
Man, 19, charged in Lincoln Park Chicago shooting, robbery
Amber Heard finishes testifying in Johnny Depp defamation case
Chicago Heights man sentenced 3 years for Biden inauguration threat
Pennsylvania election results: Mehmet Oz, Dave McCormick neck and neck
Ex-cop pleads guilty to manslaughter in George Floyd's murder
Show More
Pentagon now reports about 400 UFO encounters
Mother charged after student, 7 injured when gun goes off at school
Chicago, Millennium Park curfew changes go into effect
Chicago tobacco shops targeted y smash-and-grab burglars
NY teen found dead in SC after 13 years; Sex offender charged
More TOP STORIES News