Measles worries parents of children too young to vaccinate 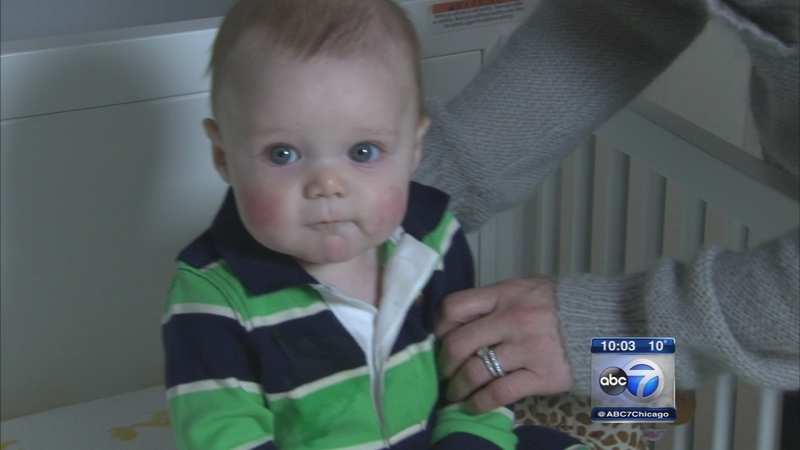 CHICAGO (WLS) -- News of the measles cluster in northwest suburban Palatine is disconcerting for parents whose children are too young to be vaccinated.

In Wilmette, Sarah Strichau is monitoring her 7-month-old son as the measles outbreak is hitting close to home. She is concerned because Oliver isn't old enough to get the measles vaccine.

The earliest recommended age for babies is between 12 and 15 months old, so the new mom is taking precautions.

"We're also staying at home and we're not going to a lot of large, public places," Strichau said.

One doctor says this appears to be a normal case of measles and there is no specific information that it is a unique strain. Doctors stress the measles vaccine is very safe and very effective for a highly contagious disease that can kill.

Symptoms can be confused with the common cold: fever, cough, runny nose. Measles then produces a rash and itchy red eyes.

Infected people are usually contagious four days before the rash begins, and for four days after. When they sneeze or cough, droplets spread into the air and remain active on surfaces for about two hours.

"What most likely happened here is this is going to trace back if they can trace it all the way back to some importation. It might be related to what is going on in California at Disneyland. It might be related to a second importation but we don't have the virus actively circulating here in the absence of one of these outbreaks," said Dr. Mark Dworkin, UIC School of Public Health.

Dr. Dworkin says children are not the only ones at risk. In 1989, a measles outbreak hit Chicago, killing eight people.

"It was quite widespread and that was because at that time just single dose was recommended, and so you had adults who were getting measles. That's important because if adults get measles, they can get quite sick," Dr. Dworkin said.

A doctor at Northwestern says adults who haven't been vaccinated, or who can't remember if they were when they were younger, should contact their doctors.

Health officials are reminding parents and day care operators about the very important steps they can take to prevent the spread of measles.

There is a strong push to make sure your children are vaccinated. That warning comes from all levels - the state, Cook County, and the City of Chicago - following a cluster of measles cases in Palatine.

We often hear about children getting shots before they head to school, but we also checked into day care centers. The recent measles outbreak at the KinderCare Learning Center in Palatine raises questions about all day care centers and what's required.

"All daycare centers should be checking the immunization status of their attendees to make sure they are fully protected so they don't get sick themselves and then bring it back to their classmates who may be too young to get vaccinated," said Dr. Julie Morita, Chicago Dept. of Public Health.

In the Palatine case, the children are likely not vaccinated, but there is a reason why.

"These are children who are probably not vaccinated because many of them are under the age necessary to receive the first vaccination," said Dr. Terry Mason, Cook County Dept. of Public Health.

That means the children are younger than 1. Health officials are again warning that children must receive their first measles vaccination when they're 12-15 months old, and a second dose when they're 4-6 years old.

"Outbreaks that are occurring in the United States are just a great reminder to everybody about the importance of the vaccine, that they prevent serious disease and the disease aren't gone," Dr. Morita said.

Measles is a highly contagious respiratory disease. Symptoms can be confused with the common cold: fever, cough, runny nose. It then produces a rash and itchy red eyes. Infected people are usually contagious four days before the rash begins and four days afterwards. When they sneeze of cough, droplets spread into the air and remain active on surfaces for about two hours.

"Do not go to the doctor's office for emergency room without calling ahead to prevent spreading the disease to others," said Dr. Rachel Rubin, Cook County Dept. of Public Health.

There have been only 45 cases of measles in Illinois in the past 10 years. The last time measles were reported in the Chicago area was 2013, when there were five confirmed cases in Cook County. In 2011, there were 3 measles cases in Cook and Rock Island counties.

And in 2008, there were 32 cases in Cook, DuPage, Franklin and Lake counties. The Illinois Department of Public Health attributes that surge in measles cases to home schooling.

The two babies confirmed to have measles cases are recovering at home and have not been hospitalized. Health officials do not know how that cluster started in Palatine, but they're still investigating.

More information on measles in Illinois:

COMPARE: Percentage of children vaccinated in Kindergarten for measles, mumps and rubella
Illinois: 94.7 percent
Indiana: 92.9 percent
Wisconsin: 92.6 percent
National average: 94.7 percent
(according to the Centers for Disease Control and Prevention)