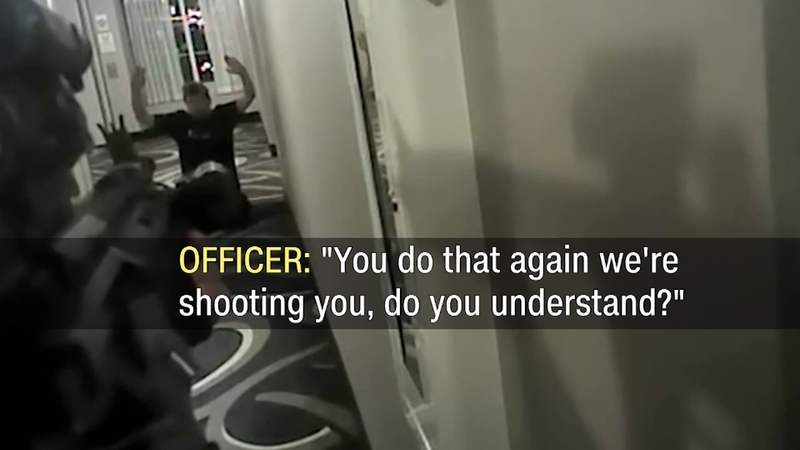 MESA, Arizona -- Just released body cam video shows a man's final moments before he was shot to death by police at a hotel in Arizona in 2016.

VIDEO WARNING: Body cam video may not be suitable for all audience.

The video is difficult to watch. Daniel Shaver begged for his life right before former Officer Phillip Brailsford fired five rounds from his AR-15, killing the suspect in the hallway of the hotel, KPHO-TV reports.


"Hands up in the air! You do that again, we're shooting you, do you understand?" Brailsford is heard screaming.

"Please do not shoot me!" Shaver yells.

Brailsford commands Shaver to crawl towards him, warning him that if his "hands go back in the small of your back or down, we are going to shoot you."
At one point, Shaver moves his right hand behind him despite the warning, prompting Brailsford to open fire on the suspect.

The former officer was charged with second-degree murder, but was acquitted last week.

Brailsford was supported by law enforcement groups, including the Mesa Police Association, who said he acted in a way that is consistent with police training.

"He could have easily and quickly drawn a weapon down on us and fired without aiming, and he could have hit us or the citizen that we had just detained," Brailsford said.

Officers rushed to the hotel in January 2016 after receiving reports that Shaver pointed a rifle out the window of his hotel room.
Witnesses later told police that Shaver was showing them an air rifle he used in his job exterminating pests.

No gun was found on Shaver's body after he was shot.