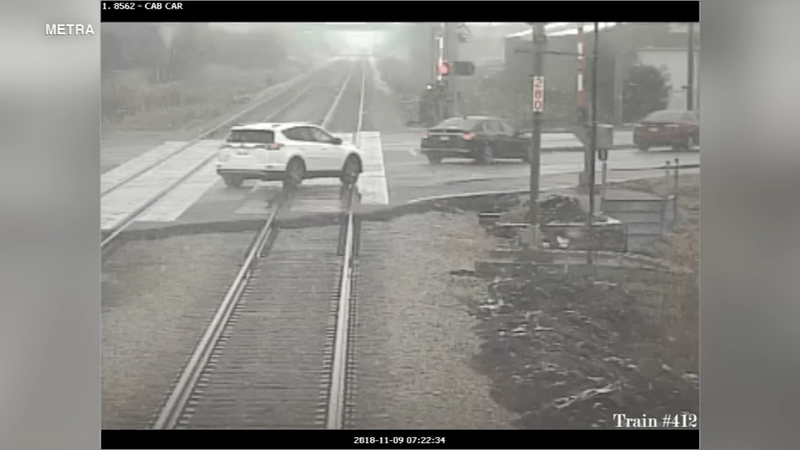 MOKENA, Ill. (WLS) -- Metra is investigating multiple close calls involving their trains and missed warnings about problems with signals and gates in Mokena.

The discovery came after a frightening incident in November, when a Metra train almost struck a police car. Video from the officer's dashcam captured the near-collision.

From the Metra train's perspective, you can see the vehicle ahead of the cop car passing in front of the speeding locomotive, just barely avoiding being hit.

But on the morning of Nov. 9, an hour and 20 minutes before the near-miss with the cop car, there was another near-catastrophe at the 191st Street crossing.

"We went back, and we decided to look at it deeper, and when we found deeper things we wanted to be transparent about it," Derwinski said.

Metra said the crossing gates failed due to an electrical short in a rail insulator. But before the encounter with the police officer officials said at least two Rock Island Line engineers failed to report the issue, allowing one train after another to continue approaching at speeds of around 50 miles per hour.

In total at least four trains passed through the problem crossing, and it wasn't until that officer was nearly struck the problem was reported and safety measures were implemented. Video shows a conductor on the train after the one that almost struck the officer manually directing traffic.

"Our highest priority is to make sure that the entire railroad system, not just the gates, are operating properly," Derwinski said.

Three out of the four engineers on those trains did not report the gate problem, but they did report a signal issue about two miles before the crossing that was also the result of the same electrical short. Why they reported one problem but not the other is also being investigated by Metra.
Report a correction or typo
Related topics:
mokenachicagoloopdashcam videometrainvestigation
Copyright © 2021 WLS-TV. All Rights Reserved.
RELATED
VIDEO: Police officer barely avoids being struck by Metra train in Mokena
TOP STORIES
New CPD memo threatens discipline for violating city's vaccine mandate
Missing 3-year-old might be with person of interest in WI homicide
Chicago win first WNBA title with 80-74 win over Phoenix
Illinois urges residents to join worldwide earthquake drill
When will mask mandate end? Chicago's top doctor weighs in
NU extends suspension of most fraternity activities amid investigation
National Association for Down Syndrome hosts annual fashion show
Show More
At least 21 shot, 4 fatally, in Chicago weekend violence: CPD
Chicago Weather: Bright sunshine, slightly warmer Monday
Chicago sports bring back some normalcy to city businesses
'Dysfunctional': Chicago's postal delivery under fire at hearing
WI meat market offers candy corn brats just in time for Halloween
More TOP STORIES News