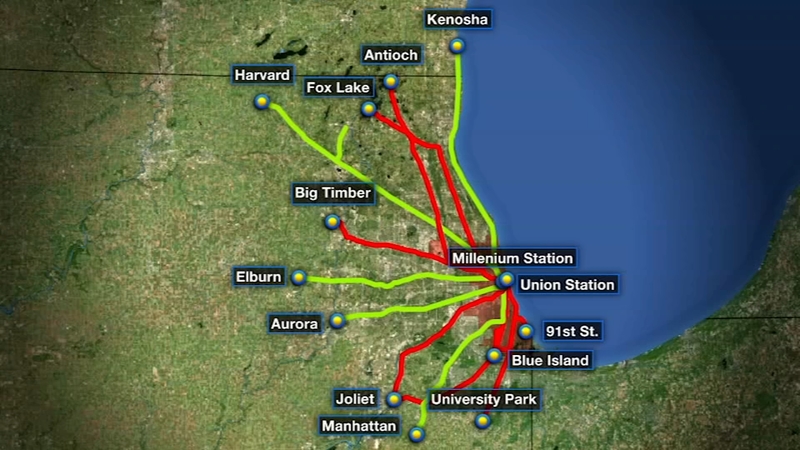 CHICAGO (WLS) -- For months, Metra riders have been experiencing their own traffic jam - crammed commuter trains.

One Metra conductor was recorded on a passenger's smartphone while he told customers that his train was short a car once again.

"We can't get our ninth car back in the next couple of days, so basically, so basically I was told to quit asking," the conductor said in the video. "Let's consider this the new norm for now."

Crowded trains and trains without all their cars have caused a commuter crunch, mostly during rush hours.

"They indicated they would be short cars and things would be crowded for a while," said John Zurales of Wheaton, a daily Metra rider.

During busy commutes, riders of shorted trains fill the aisles, often standing for their entire ride. According to Metra, the problem is worse during winter months, when icy conditions force them to reduce the number of cars.

"This is something that we see every winter. So the wheels themselves get defects on it," said Metra CEO and Executive Director Jim Derwinski. "They get inspected every single day, and if the inspection reveals a problem, the car has to come out of service....then that train would come in with a car short."

The ABC7 I-Team filed a Freedom of Information Act request to determine how often the trains are short, but they were given incomplete information for only five of the 11 Metra lines.

The BNSF line, which travels from Aurora to Union Station, has the most riders. In January alone, BNSF trains were short cars 154 times for one-way trips. More than half run during rush hour.

Metra said they are short on spare cars.

"We have a very low spare ratio of locomotives and cars," Derwinski said. "The more spares you have the quicker you can pull things out and replace them."

Southwest service trains, which run from Manhattan, Illinois, had 178 trains short a car each way in January, while 148 one-way trips were short at least one car in February.

Many riders said they are frustrated that they need to stand.

"Another thing we are doing right now is that we have a request for proposal on the street that we are evaluating to look at purchase of some new cars," Derwinski said. "It would be a small amount compared to the vast need that we have, but it's a step in the right direction."

"I'd like to see it not that way, especially since rates are going up," said Mark Harvey, who rides the UPN line.

Ticket prices increased in 2018 for the fourth year in a row, and new service cuts were announced. Metra warns that more service cuts and fare hikes could be coming next year unless they receive more state funding.

The I-Team asked about the car shortage on Metra's six other lines, but Metra said they do not keep track of that information.

"We don't track short trains on a daily basis," Derwinski said. "We work very hard every day to make sure that short trains get cars put back in there."

The I-Team was given partial data on Union Pacific Lines. During 21 days in February, 272 trains made one-way trips short a car for an average of 12 per day.

Adding to this year's weather issues was a federal mandate requiring train cars be fitted with a safety mechanism called "positive train control."

"We are putting those into service this year," Derwinski said. "That is going to add another seven to our spares. So combined, in the 10 to 14 range we should have available for next winter."

But Metra riders who spoke with the I-Team said the rails need to better prepare to keep up with commuters' needs.

"This is Chicago, since when does the weather stop anything here?" saud UPN rider Chariese Davis. "We keep running, that's what we do."
Report a correction or typo
Related topics:
travelchicagoiteammetracommuting
Copyright © 2022 WLS-TV. All Rights Reserved.
ITEAM
Teen fatally shot at 'Bean' worried about living past 21
How to protect yourself from moving company scams
How to protect yourself from doxxing
How to protect yourself from gift card scams
TOP STORIES
10 shot, 2 fatally, on Near North Side
13-year-old carjacking suspect critically injured in police shooting
City Council to take up ordinance on curfew changes
Marine veteran seriously injured in Irving Park hit-and-run
Teen shot and killed in vehicle on Far South Side ID'd by ME
Motorcyclist strikes, kills man crossing street on NW Side, police say
Celebrate National Streaming Day with Hulu for $1/month for 3 months
Show More
CTU votes for new president
Disney celebrates National Streaming Day with drone show over DTLA
City Council committee to vote on NW Side casino plan
Oakbrook Terrace fights back after red light camera permit revoked
Could remains in shrinking Lake Mead be tied to Chicago mob?
More TOP STORIES News