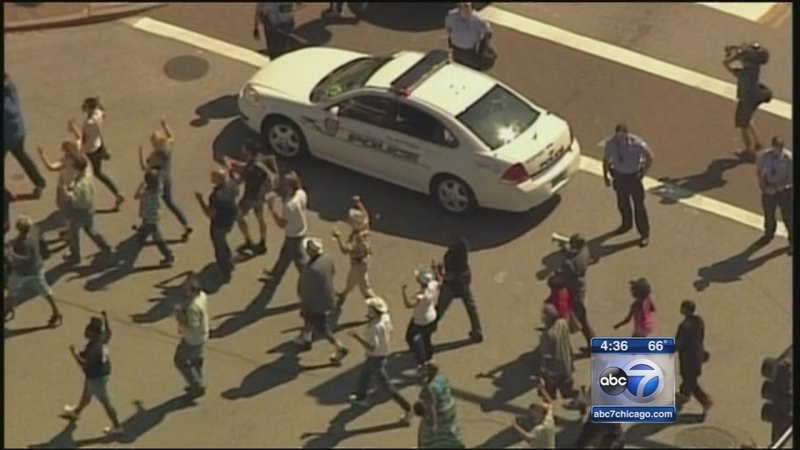 FERGUSON, Missouri -- Civil rights leader the Rev. Al Sharpton pressed police on Tuesday to release the name of the officer who fatally shot an unarmed teenager in suburban St. Louis, but he also pleaded for calm after two nights of violent protests.

The officer was placed on administrative leave Saturday after fatally shooting 18-year-old Michael Brown in Ferguson, a predominantly black city of about 21,000 residents. Police say death threats prompted them to withhold the officer's name.

"The local authorities have put themselves in a position - hiding names and not being transparent - where people will not trust anything but an objective investigation," Sharpton, standing with Brown's mother and father, said during a news conference outside a St. Louis courthouse.

But he also echoed pleas by Brown's parents and the NAACP for peaceful protests in Ferguson, where the case has stoked racial tension, protests and looting.

"I need all of us to come together and do this right," said Michael Brown Sr., with Sharpton standing at his side. "No violence."

Ferguson Police Chief Tom Jackson said he had planned to release the officer's name Tuesday but changed course after death threats were called into the police department and City Hall, and posted on social media. He said it could be weeks before he releases the name.

"If we come out and say, 'it was this officer,' then he immediately becomes a target," Jackson said. "We're taking the threats seriously."

Jackson didn't disclose specifics but said the decision came after a stream of death threats against the officer and other officers. The race of the officer involved in the shooting also hasn't been disclosed, but witnesses said he was white. Brown was black.

There were at least five arrests from Monday's unrest but no reports of looting, said Brian Schellman, spokesman for the St. Louis County Police Department, which is leading the investigation.

"People are tired. They have reached the end of their rope," Ruth Latchison Nichols said after an NAACP-hosted town meeting Monday night that drew hundreds of people. "Enough is enough. This is a state of emergency."

By early Tuesday, the streets in Ferguson were again calm. A handful of police officers sat in patrol cars near the burned out gas station, vastly outnumbered by news crews.

Authorities have been vague about what led the officer to open fire, saying only that the shooting was preceded by a scuffle with a man in which the officer's weapon discharged inside a patrol car. Police have said there is no security or police video of the incident.

Witnesses have said that Brown had his hands raised when the officer approached with his weapon and repeatedly fired.

One witness, Phillip Walker, told The Associated Press that he was on the porch of an apartment complex overlooking the scene when he saw a white officer with Brown on the street. Brown "was giving up in the sense of raising his arms and being subdued," Walker said.

The officer "had his gun raised and started shooting the individual in the chest multiple times," Walker said, adding that the officer then "stood over him and shot him" after the victim fell wounded.

Dorian Johnson offered a similar account, telling local media that he and Brown were walking home when a police officer told them to get out of the street and onto the sidewalk. Johnson said they kept walking, which caused the officer to confront them and eventually fire his weapon.

"He shot again, and once my friend felt that shot, he turned around and put his hands in the air, and he started to get down. But the officer still approached with his weapon drawn and fired several more shots," Johnson said.

The family's attorney, Benjamin Crump, was more blunt: "I don't want to sugarcoat it," he said Monday. "(Brown) was executed in broad daylight."