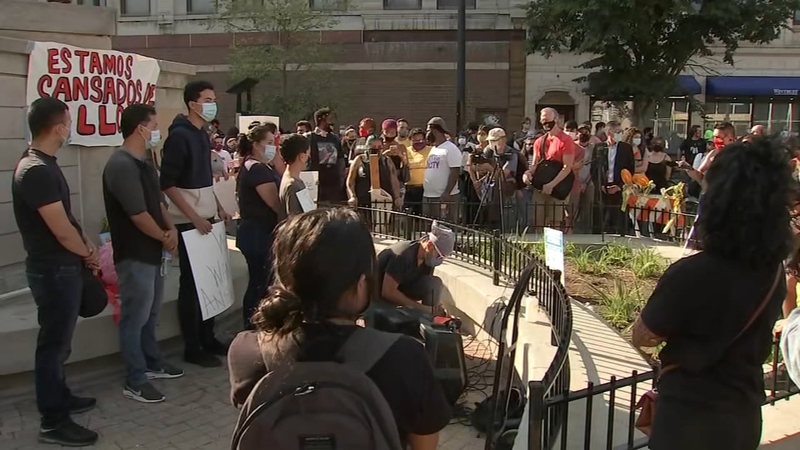 CHICAGO (WLS) -- Members of Black Lives Matter Chicago and others gathered to demand transparency and accountability after a man was shot and killed by police in Pilsen earlier this week.

Family members of Miguel Vega, 26, joined the rally Saturday afternoon at Plaza Tenochtitlan. They said Vega, who died amid an exchange of gunfire with Chicago police officers Monday night, was unarmed.

Chicago police said officers returned fire and fatally struck one man after they say shots were fired in their direction Monday in Pilsen.

Chicago police said two officers were in an unmarked squad car when they responded to a report of a suspicious person near 19th and Loomis.

They said when they arrived, five people were standing on a sidewalk and then one of the people started shooting.

"I was up in my living room and I heard some yelling and then a lot of gunfire and then I could hear the police say something like 'don't move, put your hands up,'" said Violet Scobee.

Officers returned fire and Vega's brother and mother said he was shot in the back of the head.

"My biggest guess is that my brother tried to run since he did not have a weapon on him," he said. "It's just hard. I just want the police to tell me what really happened."

Max Magnino woke up to find his car had been caught in the crossfire. He counted at least four bullet holes.

"It's like you're going to sleep, you hear gunshots in the distance and you don't really think that your car got shot up, you know," Magnino said.

When Magnino called police to help him fill out a police report for insurance Tuesday morning, they came heavily armed, a disturbing sight for many who call the area home.

Vega was taken to Stroger Hospital where he later died.

Police released a picture on social media of a weapon found at the scene.

Two suspects fled the scene and two others were taken into custody, police said.