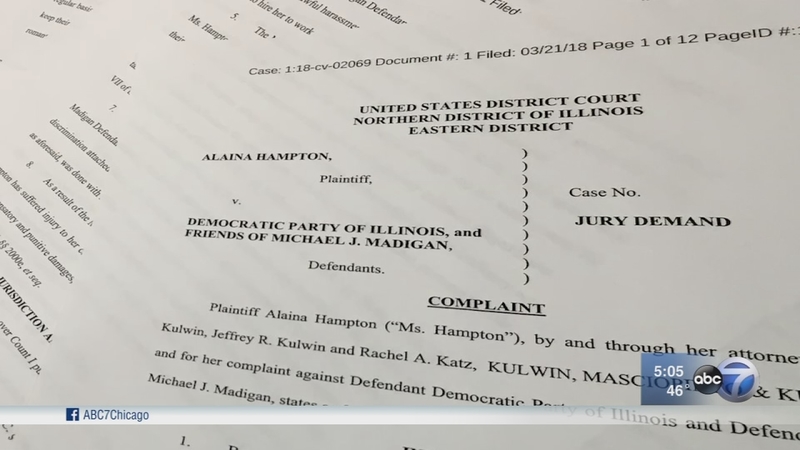 CHICAGO (WLS) -- The woman at the center of the sexual harassment scandal in Mike Madigan's campaign office has now filed a federal lawsuit.

Alaina Hampton claims her career was sabotaged after she reported the harassment.

The lawsuit alleges that after being the victim of sexual harassment by her supervisor in Madigan's campaign office Alaina Hampton then suffered again in her career.

She's filed the federal lawsuit alleging she was the victim of retaliation.

Alaina Hampton contends that if she hadn't complained about being sexually harassed by a high-ranking lieutenant of Mike Madigan's, she would still be working in campaigns that Madigan was supporting.

"I was forced to leave a job that I loved, derailing my career path, my reputation was sullied and I lost out on key job opportunities as word spread that I was persona non grata with these defendants," said Hampton at a news conference Thursday.

Hampton accused her supervisor Kevin Quinn of severe and pervasive sexual harassment, including repeated text messages where he asked her out and, in one case, where he told her she was "smoking hot."

Madigan's spokesman released a statement saying, "I can assure you that the Democratic Party of Illinois and the Friends of MJM have not retaliated against Ms. Hampton in any way."

"She was their employee, she was welcome to work for them, after this she was not. That's retaliation, pure and simple," said Kulwin.

"Right now I'm not really sure what my path going forward is going to be, but it has been a very difficult process," said Hampton.

Alaina Hampton says this lawsuit is not just about her and her career, but it's also for all the other women out there who have experienced similar sexual harassment and have not felt comfortable coming forward.