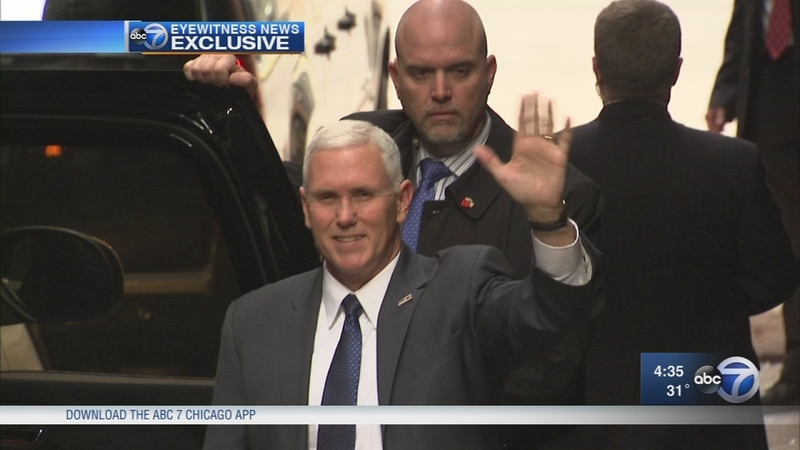 CHICAGO (WLS) -- Vice President-elect Mike Pence was in Chicago Friday for a fundraiser at the Chicago Club.

The vice president-elect avoided those protests his motorcade entered through a secure area blocked off to the public by police and secret service. Once inside the Chicago Club, people who attended the private fundraiser said Pence was upbeat and thankful.

Vice President elect-Mike Pence was in good spirits -- smiling and waving -- as he left a private fundraiser at the Chicago Club Friday. Several Illinois Republican leaders were among the 60 in attendance.

"It was very upbeat. Raised a lot money for the Republican National Committee. He talked about his experience on the road, and the campaign," said Illinois House Republican Leader Jim Durkin.

Governor Bruce Rauner was traveling for the holiday season and was not in attendance. Those who were there said Pence kept it light, and did not go into topics like job creation, even though that's what Tim Schneider, Chairman of the Illinois Republican Party, said he hopes Pence will bring to our state.

"People are leaving because there are no jobs. I think we need to bring jobs back to those communities were people have choices; and don't choose to join gangs and do those types of things. Give them a job," Schneider said.

Kirk Dillard is chair of the Regional Transit Authority, which oversees the CTA, Metra, and Pace is ready to lobby Pence into spending more money on railroad infrastructure.

"I clearly want Governor Pence, whose father was a bus driver in Chicago, to understand the need for mass transit like we have in Chicago," Dillard said.

Throughout the duration of the two hour fundraiser protesters chanted and held signs outside.
Betty Virginia Holcomb is concerned with Pence's track record of wanting to defund Planned Parenthood and restrict access to abortions.

"Mike Pence has already put in place restrictive actions in the state of Indiana that restrict women's access to reproductive rights and other types of healthcare," she said.

Glenn Pannell, who looks remarkably similar to the VP-elect, came all the way from New York to take a stand and support Planned Parenthood and LGBTQ organizations.

Tickets for the fundraiser cost $2,700 and up. The event raised hundreds of thousands of dollars that will go to the Republican National Committee to pay for multiple transition costs.