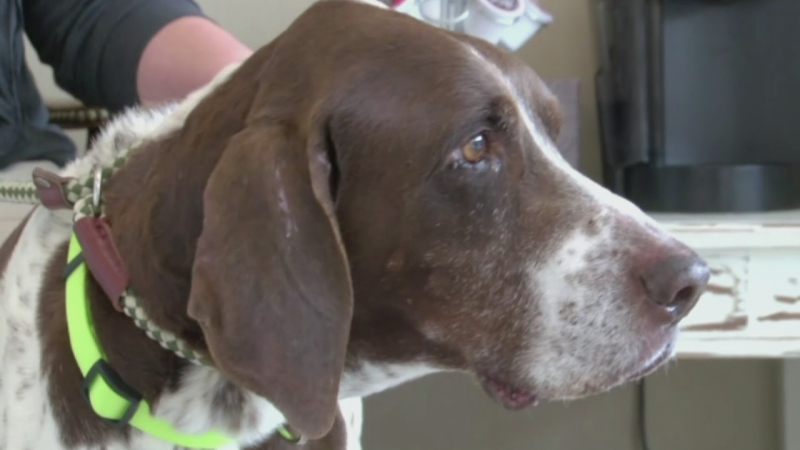 MOBILE, Ala. -- A dog missing for 10 years is now back with his family, a happy ending that so many pet owners hope for.

Charlie, a German Shorthaired Pointer, has been missing for 10 years, according to WKRG-TV. His family reported him stolen in 2006 and they're in shock that he's been found.

"I didn't know how to react at first, but it was shocking but it's kinda a little overwhelming but I'm glad that he's alive, but I'd like to get in his head and see where he's been," said Tracey Dove, owner.

Renee Jones rescued Charlie from the steps of a church near Brewton, Ala., where he'd been for at least 3 days.

"He was just in generally debilitated condition, he was starving; pretty hungry, dehydrated," Jones, the rescue director for Souls on Board Rescue Ride, said.

With visible health problems Charlie ended up at the Springhill Veterinary Clinic where veterinarian Mary Edmonds scanned him for a microchip.

"Sure enough he had a chip and we were able to trace him back to his original owners," Edmonds said.

"This is the first-time that I've actually gotten in touch with an owner, usually the situation is they haven't registered the microchip or the information is out of date, so this is an amazing story," said Barnard.

"To find out that he not only had a chip but that the information was correct and that they were thrilled to know that he was still alive, I mean it was a goosebump kind of moment," Jones said.

Charlie is sick and has a cancerous mass on his chest, which Tracey wasn't expecting to hear but she wants to make the best of it.

"He's sick but we can make his last days the best," Dove said.