TAMPA, Fla. -- The father of a missing Florida womanwho disappeared while celebrating her 36th birthday in Costa Rica has identified her body, which was found near the villa she rented.

A posting on the "Finding Carla" Facebook page said Costa Rican authorities allowed the family to view her body, which was found Monday semi-nude, half-buried and covered in plastic around 300 meters from the Airbnb villa that Carla Stefaniak rented last month.

An autopsy found stab wounds on her arms and neck, which was broken, and the cause of death was determined to be a blow to the head.

On Tuesday, Costa Rican authorities arrested 32-year-old Bismarck Espinosa Martinez, a security guard at the Villa le Mas near San Jose. He reportedly lived in the room next to where Stefaniak was staying. Espinoza said he is from Nicaragua, has been in the country since June, and has an irregular immigration record.

A body found in Costa Rica near the Airbnb where a missing Florida woman was staying is believed to be Carla Stefaniak. A security guard who lived in the room next door has been arrested.

Homicide investigators said blood indicating a violent act was found in an apartment at the facility, and that testimony he gave did not match with CCTV footage and other witness statements.

Preliminary investigation shows the suspect's motive was sexual, but authorities will do further tests to confirm. They believe Stefaniak's body was taken out of the facility shortly after she was killed.

Espinoza said the suspect had the time and space to commit the crime. He became a suspect after testimony he gave during initial interviews with police were not compatible to the rest of the evidence.

Stefaniak traveled to Costa Rica on Thanksgiving Day. No one had heard from her since Nov. 27.

Relatives of Carla Stefaniak, a Florida woman who disappeared while on vacation in Costa Rica, told ABC News they planned to identify a body found near her Airbnb.

Stefaniak's sister-in-law, April Burton, flew with her, but Burton flew back one day early. The pair stayed in beach towns around the country and posted photos and video to social media documenting their trip.

The owner of Stefaniak's Airbnb said she was last seen getting in an Uber at around 5 a.m. on Nov. 28, but her Uber records don't show a transaction. Police launched a missing-person investigation the same day.

Stefaniak's luggage and belongings have not yet been found. The suspect has not yet been charged. Espinoza said authorities are working with the prosecutor's office to keep him in custody.

Federico Jenkins, a lawyer for Villa le Mas, said in a statement that the owners are cooperating with authorities and the facility is temporarily closed.

"We are deeply saddened and devastated by the tragic events that occurred last week. The owners are fully cooperating with the authorities in the investigation and we hope that once the facts are determined, the perpetrator is brought to justice. Our deepest sympathies are with the family of the victim of this horrible crime," the statement said.

Airbnb said Wednesday Villa le Mas had been removed from its site.

The investigation is ongoing. At this point in time, there are no other suspects.

Her relatives said they will always remember the joy Stefaniak brought to their lives and how much she made them laugh.

"That's how I am going to remember her. She is my baby," Caicedo said. 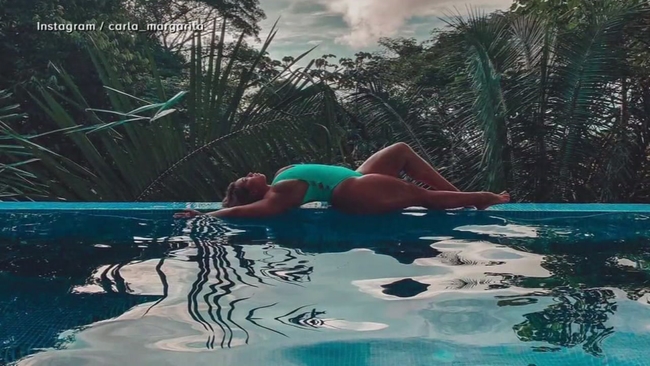