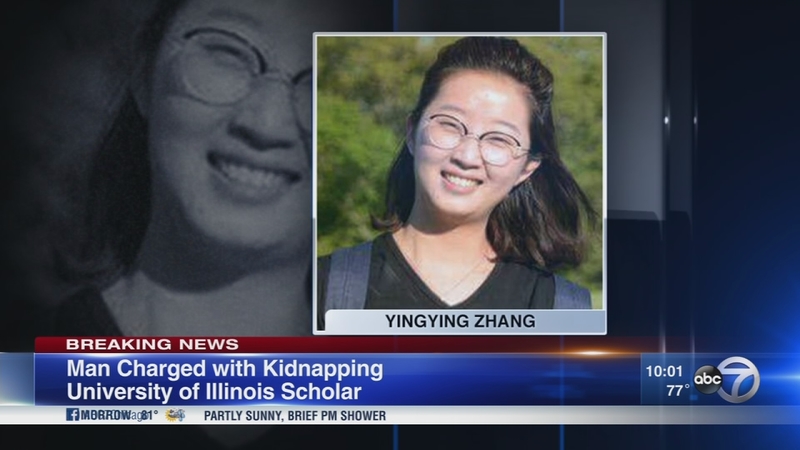 URBANA, Ill. (WLS) -- A 28-year-old man from Champaign, Ill., has been arrested and charged with kidnapping in connection with the disappearance of University of Illinois scholar Yingying Zhang, officials said.

Brendt Christensen is being held in custody until his first appearance in federal court Monday, July 3, the U.S. State's Attorney's office said.

In the complaint, prosecutors said Christensen allegedly visited a website called "Abduction 101" in April, and that FBI agents said the front passenger side door of his car had been cleaned "to a more diligent extent" than other doors.

The criminal complaint says Christensen picked Zhang up and brought her back to his apartment. He told an FBI agent he dropped her off a few blocks away after she panicked. The complaint states she told friends she was going to sign a lease on an apartment in Urbana. She never showed up.

The FBI said it has an audio recording of Christensen explaining how he kidnapped Zhang and held her against her will.

The University of Illinois released a statement, saying, "The entire campus community is saddened by this news and our hearts are with the family of Yingying Zhang tonight. This is a senseless and devastating loss of a promising young woman and a member of our community. There is nothing we can do to ease the sadness or grief for her family and friends, but we can and we will come together to support them in any way we can in these difficult days ahead."

University of Illinois Police also posted about the arrest.

An associate chancellor, Robin Kaler, said Saturday that Christensen earned a master's degree in physics from the University of Illinois in May, and that "his affiliation with the department ended that same month," though she didn't explain why. Christensen's LinkedIn profile posted online states he is a Ph.D. candidate in physics at the university and a graduate teaching assistant there since 2013. His profile also states that he graduated with bachelor's degrees in math and physics from the University of Wisconsin-Madison in 2013.

Police said Zhang was last seen just after 2 p.m. Friday, June 9, on security video from the B-4 parking garage on North Goodwin Avenue that police released. In the footage, Zhang is seen on east side of North Goodwin when a black Saturn Astra of an unknown year pulled up beside her. She and the driver spoke for a period of time before she got in the car, which drove away heading north on Goodwin.

Zhang, 26, was about a month into a yearlong appointment at the University of Illinois' Urbana-Champaign campus when she vanished. The FBI offered a reward of $10,000 for information that would help locate her.

On Tuesday, police located the Saturn Astra seen on the surveillance video.