Mizzou president resigns amid criticism of handling of racial issues 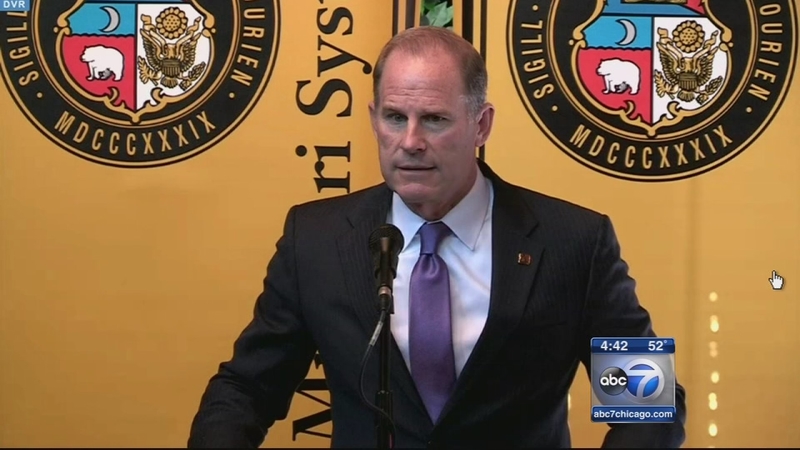 COLUMBIA, Mo. (WLS) -- The president of the University of Missouri system resigned Monday amid criticism of his handling of student complaints about race and discrimination.

Payton Head, a 21-year-old student from the Chicago area, played a big role in the protests leading up to his resignation. Head is a double major in political science and international studies at the University of Missouri.

His father says he has always been a leader, which could be why he kicked off a movement that lead President Tim Wolfe to resign.

"My motivation in making this decision comes from love," Wolfe said.

His announcement followed student protests, faculty walkouts and even football players and their coach refused to take the field until Wolfe resigned.

Wolfe, a former business executive with no previous experience in academic leadership, had come under fire for his alleged mishandling of a series of racial incidents on the overwhelmingly white campus.

Protests began in September when Payton Head, the student government president, said people in a passing pickup truck shouted racial slurs at him. Head took to social media to call for tolerance - a move that did not surprise his father, Lawrence Head.

"He really believes that he can be an apostle for change," Lawrence Head said.

Payton and his twin sister Kandice grew up in the Chicago area. They're both seniors at the University of Missouri, a place that still has Lawrence Head's support.

"Like any institution, it has growing pains. This movement was a part of those growing pains," Lawrence Head said.

His father says Head was a born leader with a need to do the right thing. Those traits made him a stand out student in his AP psychology class at Rich South High School.

"As a student, he was always very mature. He was well-rounded. He had his ideals, his morals, his values and he liked to see right thing done," said Susan Lundgren, a teacher at Rich South High School.

Lawrence Head says he's excited to see what the future holds for the University of Missouri.

"Hopefully dialogue will come about where it will promote some positive change there," he said.

Payton Head graduates from Mizzou in the spring and hopes to go to graduate school.

Wolfe's resignation is effective immediately and the football team will resume practice on Tuesday ahead of Saturday's game. Canceling the game could have cost the school more than $1 million.