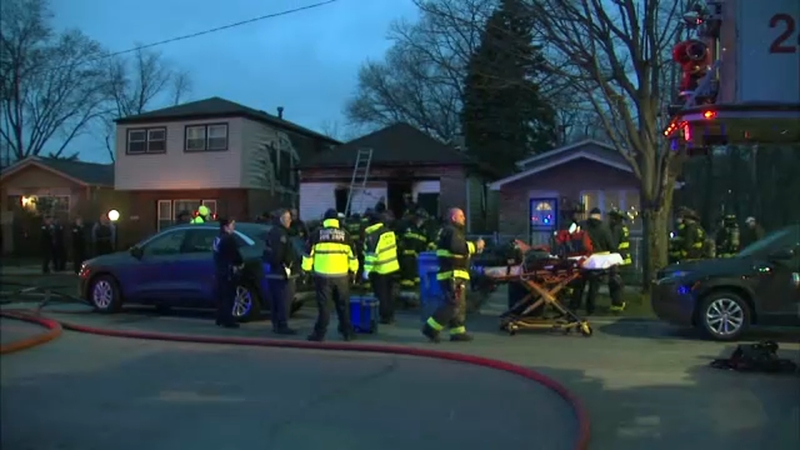 CHICAGO (WLS) -- Two people were killed in a house fire on Chicago's Far South Side Thursday.

Chicago Fire officials said so far it's still too soon to say if there was any was foul play involved, as some now grieve the loss of two loved ones.

"Our heart goes out to the family of victims of this tragic incident," said Anthony Frazier, deputy district chief for Chicago Fire Department.

Fire investigators are sifting through the rubble of the house in Chicago's Morgan Park neighborhood.

The Chicago Fire Department responded to the 11300 block of S. Homewood Ave. just before 6:30 p.m. after reports of people trapped inside a burning home, fire officials said.

When fire crews arrived they were met with heavy flames on multiple sides of the home.

"When we pulled up, there was a heavy volume of fire in the front of the building," Frazier said.

But the bigger concern for responders was trying to get to the people inside.

Deputy District Chief Anthony Frazier says the two males were found half way through the one-story building and that firefighters faced multiple challenges trying to put out the flames, including barricades on the back door.

"It was a lot debris inside of building, which made fire hectic to fight," he said.

Firefighters searched the home and said they did not find anyone, but during a second search is when they said they discovered two men dead inside the home, according to CFD.

Still and Box on the 113OO Block of South Homewood has been secured. Sadly there are two fatalities; two male victims; OFI is investigating. 0 pic.twitter.com/2CdYISunlj

Fire officials said there was a lot of debris in the home which could have been fueling the fire.