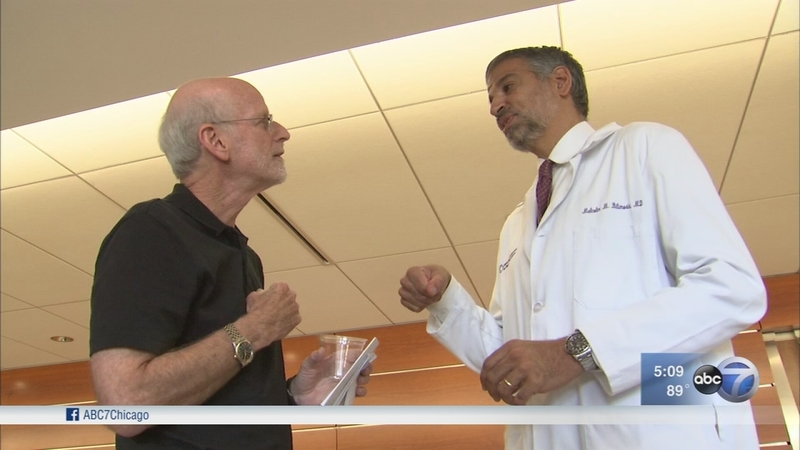 Hiking Mount Kilimanjaro was a dream of Ken Brown, but it took a cancer diagnosis to jumpstart the plan into reality.

Four years ago, Brown was diagnosed with pancreatic cancer, which has a survival rate of 5 percent. On Thursday, he leaves for Tanzania to hike Mount Kilimanjaro - and he's bringing the doctor who saved his life.

"It's unfortunate that it took a life-changing event to go ahead and make me realize that when you have an opportunity to do something, do it," said Brown, who had wanted to hike Kilimanjaro since 2011 when he and his wife went on safari in Tanzania.

"I could see when I first met Ken, he was a lot like the patients I see in the clinic, a real fighter," Bilimoria said.

That was followed up with checkups every few months. It was during a check-up in April that Brown asked Bilimoria about his summer plans, which included a hike up Kilimanjaro. Brown joked about tagging along, but after he was given a clean bill of health, his doctor decided to go for it.

"Having survived pancreatic (cancer) he should do whatever he wants to do, whatever makes him happy," said his wife, Bobbi Brown.

Brown leaves for Mount Kilimanjaro on Thursday, Dr. Bilimoria leaves Friday. They start their hike Sunday and it's scheduled to go six days. They will be joined with other physicians.

"People have different mountains they have to climb and it might be someone who's facing a different type of cancer and can't get out of bed after chemo," Brown said. "If they get out of bed that day, they've climbed a mountain equally as high as Kilimanjaro."
Report a correction or typo
Related topics:
health & fitnessarlington heightshikingdoctorscancer
Copyright © 2021 WLS-TV. All Rights Reserved.
TOP STORIES
New omicron variant stokes world fears, triggers travel bans
Entrances to Aurora outlet mall temporarily closed due to crowds
Machete attacks reported on Chicago's NW Side: 'The cut was very deep'
Foot Locker among 3 stores burglarized within an hour on NW Side: CPD
Police close westbound I-88 in Aurora due to 'serious injury' crash
Watch: Thieves burglarize Pilsen restaurants overnight
Musical theater master Stephen Sondheim dies at 91
Show More
Missing gun belonging to Laundrie's parents wasn't made public
Stores kick off Black Friday but pandemic woes linger
'The Hot Zone: Anthrax' revisits troubled days after 9/11
Stocks fall sharply on new COVID variant; Dow has worst day of year
Buffalo Grove fire damages home, 1 treated for smoke inhalation
More TOP STORIES News