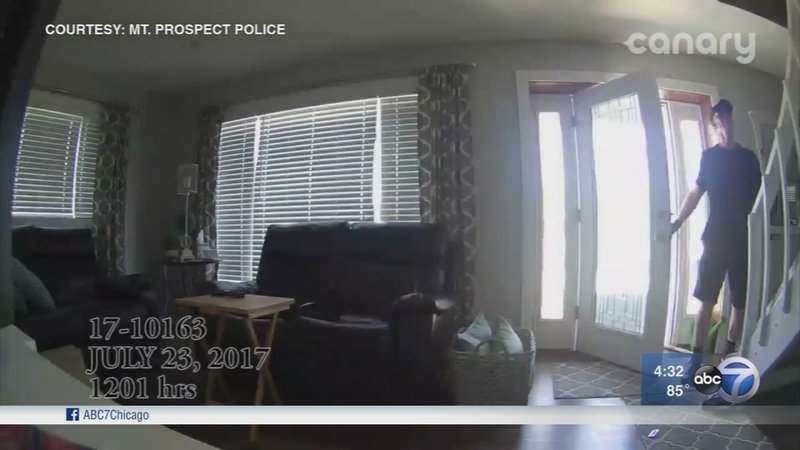 MOUNT PROSPECT, Ill. (WLS) -- Mount Prospect police are asking for help in finding the man who police said forced his way into a home while a child hid upstairs.

The homeowner said her 16-year-old daughter called her and said a man was knocking excessively at the door. So the mom, who was driving home from work, turned on the home's security camera using her phone and caught video of the break-in.

The surveillance video showed the man kick open the front door of a home on the 300-block of North William Street in Mount Prospect at noon on July 23.

He stood there and checked to see if anyone was home. What he didn't know was a 16-year-old girl was hiding in an upstairs bedroom. The girl was on the phone with her mother, Bonnie Bridges, telling her to get home as fast as she could.

"My heart dropped, my body started shaking. Trying not to blow red lights, trying to maintain my composure as I'm calling 911," Bridges said.

In addition to calling the police, Bridges was also checking the family's living room surveillance camera through the app on her phone, watching the intruder's every move.

The intruder then made his way up the stairs and moving to the room Bonnie's daughter was in.

"The only door that was locked and shut was the one my teenager was hiding behind because she has heard him kick the front door open. So he kicked her door open. She screams bloody murder at the top of her lungs," she said.

That scream may have saved her, as the man ran out of the house so fast he leaves the front door ajar.

Police are still looking for the suspect.

"We want to catch this person. We don't want him to do this to anyone else," said Mount Prospect Police officer Greg Sill.

Bonnie and her family now highly recommend multiple layers of security for every home in America. In addition to their canary camera, they've also invested in the ADT security service after this home invasion.

The 16-year-old girl is on vacation with her father right now. Her mom says she's doing great and this situation was a wake up for what she wants to do with her life, which is now to become a detective.

It's unclear if the man actually took anything from the home. The suspect is described by police as a white man, approximately 55-66 years old with white hair, wearing a black baseball hat, sunglasses, black T-shirt, black shorts and black shoes.