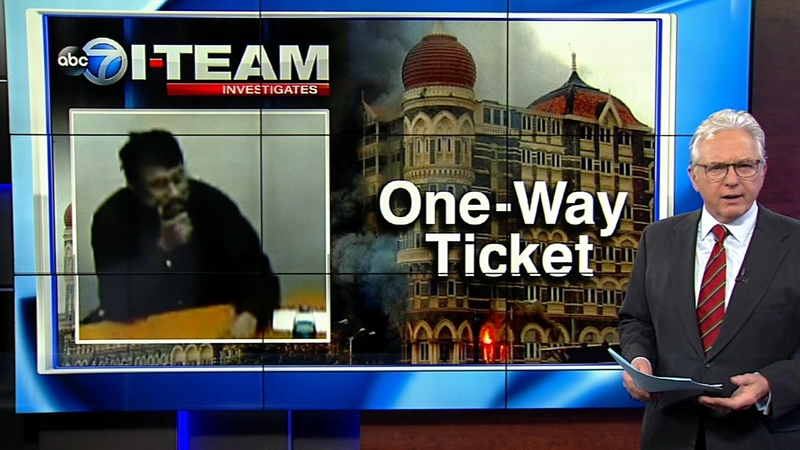 Ten years after India's most traumatic terror attack, U.S. officials are prepping extraordinary plans to send a Chicago man to Mumbai to face charges there, the ABC7 I-Team has learned.

Rana, 57, helped scout attack locations in India, according to U.S. and Indian law enforcement. He teamed up with convicted Mumbai plotter David Coleman Headley, another Chicagoan who pleaded guilty in the case and cannot be extradited under the terms of his agreement with prosecutors.

The National Investigation Agency (NIA) of India has been pressing for Rana's extradition for years.

"The barbarity of 26/11 shocked the entire world. It is an affront to the families of the victims that, after 10 years, those who planned the Mumbai attack have still not been convicted for their involvement," Pompeo said. "The United States is committed to seeing that those responsible for this attack face justice."

"It's unusual. It just doesn't happen very often," said former federal prosecutor and ABC7 legal analyst Gil Soffer of the plans for Rana's extradition. "Especially when the defendant, the prisoner, is still in prison and still has time on his sentence."
Rana was charged in Chicago with helping Headley conduct reconnaissance for the group of radical Pakistani commandos that assaulted Mumbai. Rana and Headley were also charged with plotting an attack on a Danish newspaper that had published cartoons of the Prophet Mohammad. A jury found Rana guilty in the newspaper plot and of providing material support to the Pakistani terror organization Lashkar-e-Taiba (LeT). He was acquitted of conspiracy in the actual Mumbai attack.

To avert a double jeopardy claim by Rana, Indian authorities want to try him on charges of plotting an additional mass casualty attack that was to have taken place after the Nov. 26, 2008, invasion. NIA is also planning to charge Rana with forging documents for Headley to set up a cover business in India.

The United States has extradition agreements with more than 100 nations but statistics reveal it is far more likely for the U.S. to demand extradition of criminal defendants to the U.S. than to send suspects out of the country for prosecution elsewhere.

As part of the Trump administration's mission on behalf of India, the U.S. State Department Rewards for Justice program has offered up to $5 million for information leading to the arrest or conviction of any individual who was involved in planning or facilitating the Mumbai terror attack.

All 10 of the heavily-armed Mumbai insurgents are dead; 9 were killed during the blitz that brought the attack to an end and one was apprehended and hanged in 2012.
In addition to Rana and Headley, federal investigators say that at least three key plotters indicted in Chicago are still fugitives and suspected to be hiding out in Pakistan. They are retired Pakistani Army major Abdur Rehman Hashim Syed, Pakistani LeT chief Sajid Mir, who was Headley's handler, and a shadowy defendant known only by the alias "Major Iqbal" who was an officer in Pakistan's Inter-Services Intelligence Directorate (ISI). In the Chicago indictment, Iqbal is also referred to as "FNU LNU," which is court lingo for "First name unknown, last name unknown."

The fugitives in South Asia are better off than Tahawwur Rana, who is in custody at Terminal Island, California, a federal prison where Al Capone was once held.

While Rana will have some opportunity to oppose extradition in a court filing, attorneys associated with his Chicago case told the I-Team they were unaware of the government's plans.

Rana's wife did not respond to I-Team requests for an interview.

Rana will have little standing to derail extradition according to legal analyst Soffer. He also says Rana's future may well blow with the political winds.

"If relations with India are at such a point -- whether good or bad -- it is very important for India to get their man and charge him for conduct that occurred on their soil that will move the extradition process along," he said. "Without question, if you're Rana, you do not want to be in India where you're going to be charged with committing mass murder on the soil of that country. You're going to be much happier staying here for good."
Report a correction or typo
Related topics:
court caseterrorismi teamu.s. & worldterror attack
Copyright © 2021 WLS-TV. All Rights Reserved.
I-TEAM
How to avoid getting ripped off by COVID scams
Supply chain disruptions impacting some IL state prison commissaries
Where do Illinois state workers stand with vaccine mandate?
Who was man in uniform behind Rahm Emanuel at senate hearing?
TOP STORIES
Businesses burglarized in Gold Coast: police
Alcohol shortage looms: 'They don't know what's coming'
At least 23 shot, 3 fatally, in Chicago weekend violence: CPD
3 injured in NW Side 8-car crash, carjacking
Families of missing Black men plead for more accountability
Sunday Mass at Holy Name Cathedral
Wisconsin audit finds elections are 'safe and secure'
Show More
Vanessa Bryant's says she learned about Kobe's death from social media
Film crew voiced safety concerns before Alec Baldwin fired prop gun
Water crisis in 9th day as officials point to Dixmoor infrastructure
Fort Valley shooting: 7 hurt, 1 killed at party near GA school
Chicago Weather: Heavy rain Sunday
More TOP STORIES News