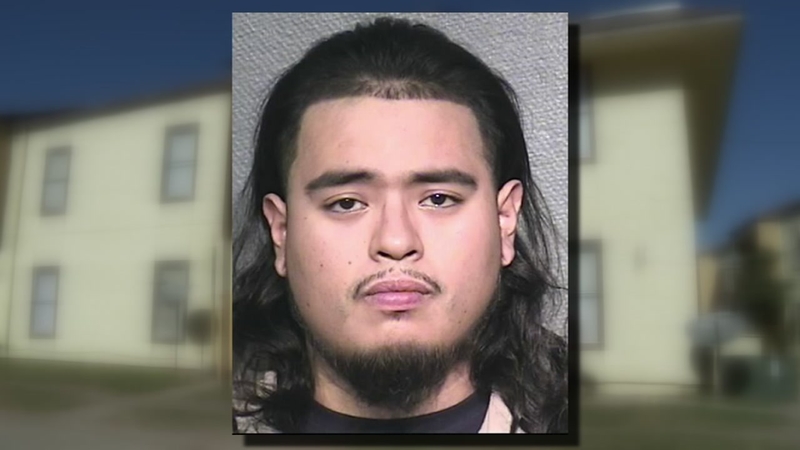 HOUSTON, Texas -- A 4-year-old boy is recovering from a gunshot wound. His upstairs neighbor is accused of shooting him through the floor on Black Friday.

At the family's northwest Houston home, you can see the hole from the bullet that punched through the ceiling, and then hit the floor. In between was a toddler swing with a little boy sitting inside, playing a video game.

"I just heard a BAM from inside the house. I got really scared and my kids started screaming," the mother, who didn't want to be identified, told Eyewitness News.

She was in the bedroom getting dressed to take the family shopping for Black Friday. The kids were playing in the living room when the bullet struck.

"I didn't realize something happened to his leg actually, until I pulled down his pants and I saw there was a hole and I started crying and I called my husband, 'Hey, let's take him to the hospital!'"

The family drove the little boy to a nearby hospital. The mom showed Eyewitness News what the bullet left behind: a large gash on his right leg, and 14 stitches to close it all up.

The family's upstairs neighbor, Nahum Flores, is accused of firing a rifle through his floor. Authorities say Flores told police he accidentally fired the shot.

"I heard a gunshot from around the corner so I ran that way because my kids had just gone to that corner," said Theresa, a neighbor who heard the shot and called 911.

She said the distraught father exchanged words with Flores moments after the shooting.


"The guy downstairs come outside and starts yelling at the neighbors upstairs, 'You shot my kid, you shot my kid!'"

Flores, who is charged with aggravated assault with a deadly weapon, is already out on bond. We tried talking to his brother-in-law, who would not comment on the charges.

The little boy is home, but his mother says he is afraid of others coming to hurt him. Both families still live just a floor apart.

The bullet holes remain. The family wants to move, so the kids will feel safer.