The issue commemorates the 75th anniversary of VE Day, or Victory in Europe Day.
WABC 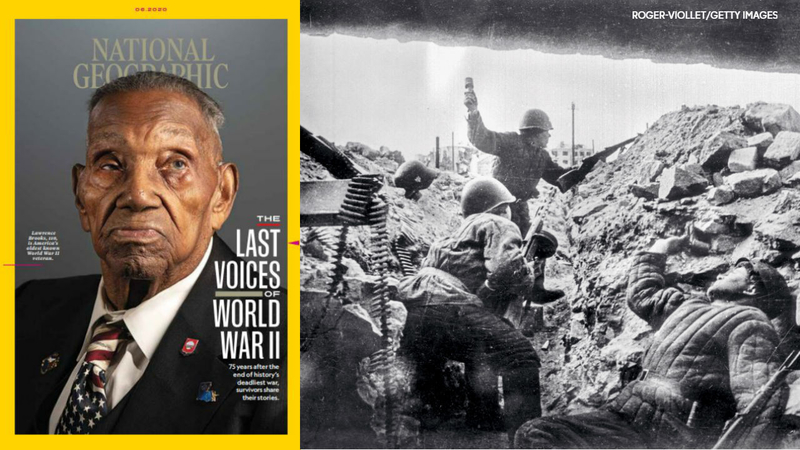 Ahead of the May 8 anniversary, Nat Geo interviewed a number of veterans and survivors from around the world to provide first-hand commentary on their experiences during WWII.

NatGeo's Instagram hosted a live conversation between Polinsky and photographer Robert Clark on Wednesday, and WABC-TV interviewed both of them.

One of the covers features 110-year-old Lawrence Brooks.

"It was really interesting to talk to him about segregation and racism and also being a patriot and talking about the things he went through," Clark told reporter Tim Fleischer. "A really proud American."

"She worked on the Enigma and breaking the code," Clark said. "She was an amazing lady."

Those featured, their pictures, their stories, crossed many lines during the war. Some allies, some enemies.

"There were good guys and there were bad guys in this conflict," he said. "It's one of the times when words and pictures go together. Sometimes they are separate statements about the same subject. This was something where they went really well together."

Nat Geo interviewed a number of veterans and survivors from around the world to provide first-hand commentary on their experiences during WWII.

The NatGeo stories are all available online at NatGeo.com/WWII, documenting those who survived an important time in history.

"You have to tell these stories now," Clark said. "Or it's going to be gone."

Another of those stories is Gene Polinsky, who flew clandestine missions of Nazi-occupied Belgium, France and Norway. He talked to WABC-TV anchor Michelle Charlesworth.

Polinsky was 22 at the time, and it would be some 60 years later when he was 80 that he received the Congressional Gold Medal for the OSS for liberating the port of Antwerp.

It was a huge turning point in World War II.

"To discover that what you did really was significant, that you did something that's worthwhile for the rest of your life, gosh, what a feeling that is," he said.

He and his Carpet Bagger crew flew 35 missions, often over Nazi occupied territory.

"I was lucky, we were lucky," he said. "Because three other crews who were trying to do this particular mission got shot down, and we didn't. We survived."

His job was to be the GPS in the air, in total darkness.

"I wasn't ready to be a navigator," he said. "I was ready to be an actor. I was in in the theater. I had been at Summer Stock for a couple of years."

Still, he says the gratitude he's received for his service is special.

"I hear it more and more often these days, 'thank you,'" he said. "And it feels good in my heart and in my gut."

Polinsky's remarkable story is just one of the many being featured in National Geographic's coverage of the 75th anniversary of the end of WWII in the June 2020 issue.