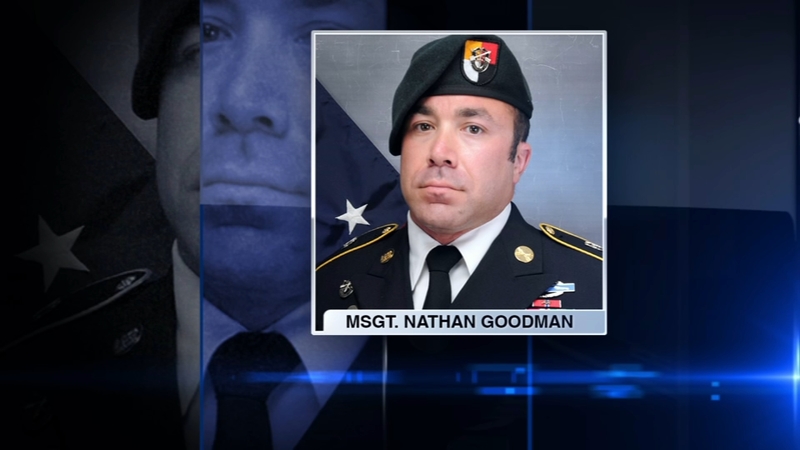 LANSING, Ill. (WLS) -- The father of a soldier from Lansing who was killed during a training exercise in Arizona Tuesday said he just can't believe his son is gone.

U.S. Army officials confirmed that Fort Bragg Master Sgt. Nathan Goodman, 36, was killed during a free fall training exercise in southern Arizona. Free falling is when parachutists jump from an aircraft and delay opening their parachutes.

"I not only lost a son, I lost a good friend," Goodman's father Larry Vis said.

Goodman grew up in Lansing and graduated from Thornton Fractional South High School.

"The army came here Tuesday night, and they just told us it's under investigation," Vis said. "They said it was a malfunction in the parachute."

Goodman's father says he enlisted in the Army in 2002 and had been deployed to Afghanistan, Iraq, Africa and other places.

He had an upcoming tour in Syria after being promoted last year. Goodman became an operations "team" sergeant for a Special Forces Operational Detachment Alpha. Goodman was in the 3rd Special Forces Group's 2nd Battalion.

"...deployment so many times and he's never gotten hurt. But he ends up getting killed in Arizona of all places," Vis said. "It would be a little easier to understand if it happened while deployed in all those other countries."

Goodman's death comes just days after a soldier from Aurora was killed by a roadside bomb while deployed in Afghanistan.

Pfc. Miguel Villalon, 21, was one of two soldiers killed Saturday in Kandahar Province.

Army Specialist and Hazel Crest native Henry Mayfield, Jr. was killed earlier this month in a terrorist attack in Kenya. Mayfield was one of three Americans killed when Al-Shabab extremists attacked the base.

Henry Mayfield's body returned to the Chicago area Wednesday after he was killed in a Kenyan terrorist attack. The army specialist was a Hazel Crest native.