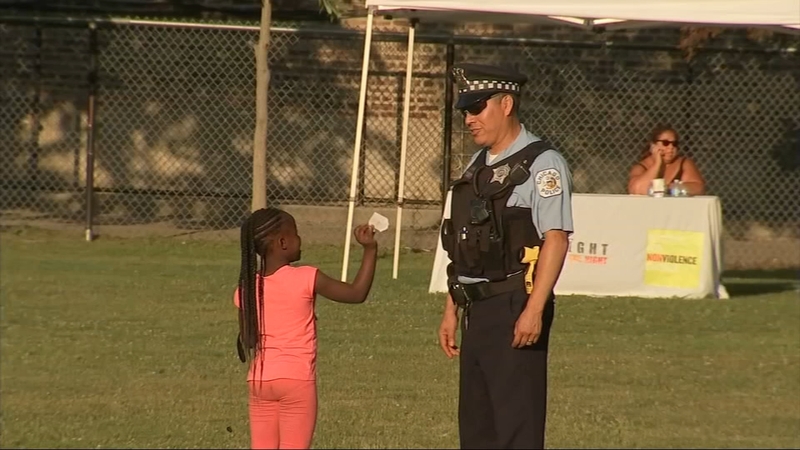 National Night Out events aim to bring police, communities together

CHICAGO (WLS) -- After a violent weekend in Chicago, Mayor Lori Lightfoot and Police Superintendent Eddie Johnson joined community events across the city as part of the 36th annual National Night Out.

The events are intended to help build relationships and promote community partnerships in an effort to make neighborhoods across the country safer.

Seven people were shot and killed and another 52 were injured by gunfire this past weekend.

"The purpose is for police departments to give back to the community, so today this is all Englewood," said Sergeant E. Dixon, Chicago Police 7th District Community Policing.

The Englewood event features performances, free haircuts and plenty of other activities to keep young ones busy.

"Let them see that police have another side, because usually when people call police it's because there is trauma or they need help," Dixon said.

In Austin, the event was all about fun with a message.

National Night Out holds events that help communities and police come together, get to know each other and improve trust to make cities across the nation safer.

The commander of the 15th District said it's really about bridging the gap in the communities between the people that live there and the police, and their community partners

"There are stories of hope, there are stories of young people whose lives are changed, there's stories of community coming together, so when you change the narrative people in their community feel different about their neighborhood," said Adam Alonso, CEO of BUILD's street gang intervention program.

"Yes, there is still violence, but together we can make an incredible difference. We are making a difference," said Tara Dabney, Institute for Nonviolence Chicago.

The National Night Out events are among the ongoing efforts in Chicago to improve relations between police and communities, and for the first time, young people have been asked to be part of the solution as the Youth District Advisory Council.

The Junior Liaison Organizers in the 7th District are working to keep kids focused on their future.

"I want to be part of the change, so they aren't afraid to play in the park," said Andrea Hernandez, Junior Liaison Organizer.

The organizers are well aware of the violence affecting the city, especially Chicago's youth. Two years ago, Itzury Cano's brother was a victim of gun violence.

"When that happened I knew I wanted to do something good for my community, and this is the way to do it," Cano said.

The western suburb was rocked by its own mass shooting in February, but that didn't deter any Night Out-goers.

In Wheaton, neighbors were also defiant, and in Rolling Meadows there was applause for the police department.

The FBI also took part in a dozen Night Outs in the city and suburbs.

"We want people to know that we're proactively getting out there. We're not just there when there is a national emergency. We're there every day for people," said Special Agent Siobhan Johnson, FBI Chicago.