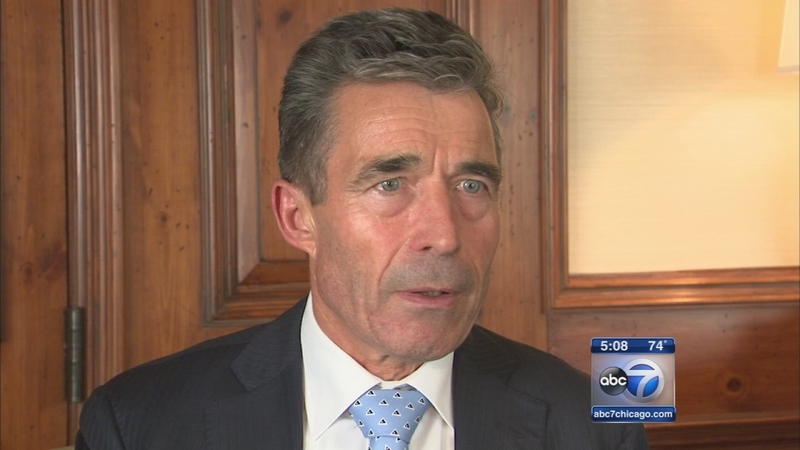 CHICAGO (WLS) -- The secretary general of NATO is in town to receive an honor from the Chicago Council on Global Affairs. Anders Fogh Rasmussen spoke with Eyewitness News about how our city plays a big role on the world stage.

The NATO summit put an international spotlight on Chicago. The attention may have faded, but Rasmussen says he's grateful to the people of Chicago for hosting and matters addressed during that summit are still critical to our global security.

"I really appreciate that Chicago offered to host," said Rasmussen. "I know from my own experience that people in this part of America are also very interested in global affairs and their own security."

Outside of the Chicago summit were those protesting NATO and American military involvement in a variety of places around the world.

Three young men were recently sentenced in Chicago for possessing Molotov cocktails as dignitaries arrived for the summit. They are acquitted of terrorism charges. Rasmussen expects there will be protests in Wales.

"It is part of being an open and free Democratic society that people have the right to express their views of course in a peaceful manner," said Rasmussen.

Inside the Chicago summit in 2012, the most notable agreement was a roadmap out of Afghanistan. NATO's International Security Assistance Force will leave the end of this year, but NATO will remain to train Afghan security. Recent attacks by Afghan security guards have not altered these plans.

In April, Dr. Jerry Umanos was training doctors in Kabul. He was greeting two visiting physicians from the Chicago area when an Afghan officer shot them. All three were killed.

"All the sacrifice is not in vein. We will leave behind a much better Afghanistan society than ten or fifteen years ago," said Rasmussen.

During the Chicago summit, there was a lot of discussion about NATO's relevance post-Cold War. Rasmussen says the growing tension between Russia and Ukraine prove a relevance.

He adds that while a show of military strength may be required in some situations, diplomatic solutions are the aim. The summit in Wales will be in September. Organizers have been in touch with those who planned for the Chicago summit.