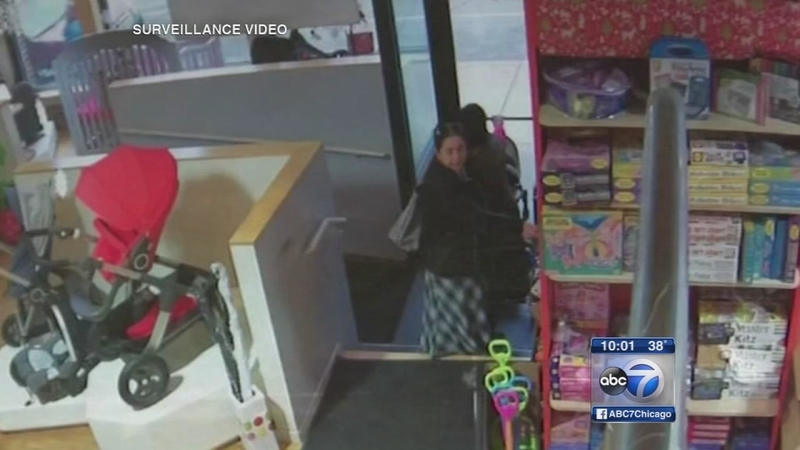 CHICAGO (WLS) -- Police are investigating a rash of business burglaries at the height of the holiday shopping season. In one case, two women can be seen stealing a high-end stroller.

The two women are calculating and quick. Video shows one cautiously playing look out as her accomplice rolls the luxury stroller toward the door and they're gone. It's a pricey heist.

"Value-wise, retail is $1,425. It's one of the more expensive strollers on the market," Garcia said.

The thieves struck this weekend at Galt Baby on North Clybourn. On Wednesday morning, the Moosejaw next door was burglarized.

"I'm really concerned because we do not have any surveillance cameras and we have a lot of businesses," said Renato Hess, a physical therapist who thinks he saw two suspects very early Wednesday morning.

"I usually arrive and no one is around. Usually people are asleep. I walk across the street, noticed this is kind of weird, why are these two guys in these cars waiting and the cars are on," Hess aid.

Minutes later, the thieves smashed a window and took thousands of dollars-worth of winter coats.

Five burglaries in ten days forced Chicago police to issue a community alert. Some were in the city's prestigious Gold Coast.

"I can only hope that somebody recognizes them and they get turned in and they should be pay for what they're doing," Garcia said.

The alarm went off instantly after the Moosejaw burglary, but Chicago police said the thieves are quick and were gone within minutes.

In some of the incidents, police said offenders forced entry to the business by breaking a window and removed property during the early morning hours. Incidents were reported at the following locations:

No descriptions of the suspects have been released. Anyone with information on these incidents is encouraged to contact Chicago police at 312-747-8382.