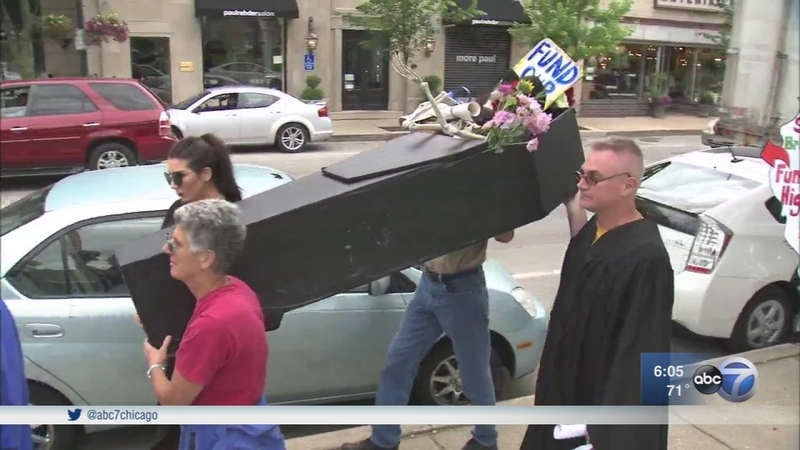 WINNETKA, Ill. (WLS) -- Dozens of faculty members from Northeastern Illinois University held a New Orleans-style funeral march for the state's higher education through the streets of Winnetka and up to Governor Bruce Rauner's door.

They marched to the governor's home because they said they were out of other options. NEIU typically operates on a $90 million budget, one-third of which is funding from the state. Now the school is trying to figure out how they will open their doors in the fall.

The NEIU employees took their slow funeral march through downtown Winnetka. At the front of the pack of horns and robed employees was a tombstone symbolizing the death of public education.

"What we think this is, is Rauner trying to ruin the university system," said Sophia Mihic, professor of political science and philosophy at NEIU and president of the faculty union.

"Right now we are number 49 among the 50 states in public higher education funding. And that will not bring people to the state of Illinois," said Jeanette Hernandez, administrative aide in world languages and cultures.

"We are in the midst of a huge layoff right now," said Ellen Larrimore, university archive and reference desk staffer.

By the end of this round of layoffs, 180 NEIU employees will have lost their jobs - unless, of course, a budget deal is reached. That's on top of several furlough days just this year.

"I wanted to stay at Northeastern through my retirement," said Linda Lowe, clerk of enrollment services, about her grave concerns about losing her job.

The flowers and symbolic coffin were a sign these educators have all but given up on the governor. They are now taking a different course.

"I think now is the time where we forget Governor Rauner and speak to each other as citizens, and I'm really hoping that Republicans and Democrats can get us a budget," said Mihic.