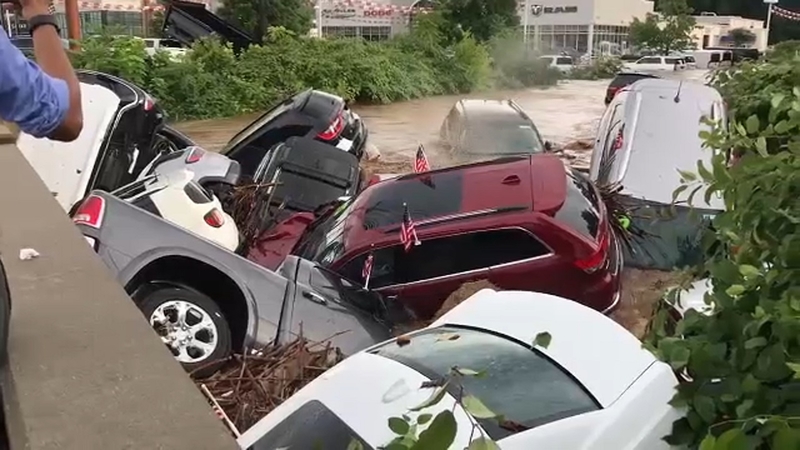 LITTLE FALLS, New Jersey -- Like a water edition of destruction derby, cars in New Jersey were swept away by heavy flooding during Saturday's strong storms.

One of the vehicles that floated away from the Little Falls dealership where it finally came to a stop in the Peckman River @ABC7NY pic.twitter.com/9N4t4zwsI7

The Chrysler Jeep Dodge Dealership of Little Falls is in crisis, after car after car floated to its demise.

Danielle Leigh has more on the dangerous floodwaters in New Jersey.

People on Route 46 were also stranded and forced to turn around.

The flood water did not stop there - it suddenly spewed out into Woodland Park, leaving streets, homes and businesses underwater.

Sebastian Jackson was in target practice when empty cars fled their parking spots and the shooting range filled up with water.

Guns for Hire evacuated in Woodland Park, NJ after water rushed inside this evening as people were shooting. Thanks to Sebastian for this video. @ABC7NY Hours later people still waiting to retrieve IDs and flooded cars. pic.twitter.com/daObv5KMAw

As the flooding spread, so did the chaos - leaving tow trucks to retrieve cars abandoned in the middle of the street.

Maria Florio says she barely moved her vehicle to higher ground in time - minutes later her garage and basement had flooded too.

"It was basically hysterics, basically you didn't have time to be scared," Florio said.

The car dealership is near the Peckman River, where cars ended up submerged in the water. A towing company owner said about 16 cars had been removed from the river by Sunday morning.