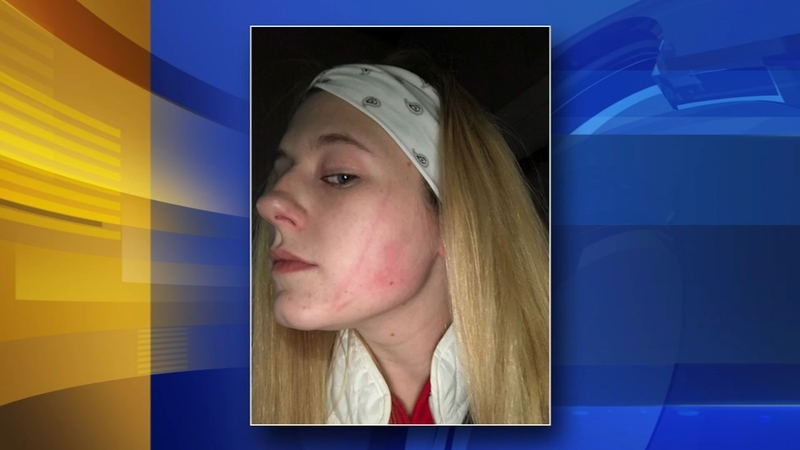 DEPTFORD, N.J. -- A day at the mall turned violent for one group of teenagers in New Jersey after they say they were attacked by some adults outside of the Deptford Mall.

Around a kitchen table Monday, three teens described what they say was several minutes of an unprovoked assault Friday night.

"The older woman hit me, like with a straight open palm," said Alexandria DeRusso. "Like smack right across the face."

Tatum Bohanon said right after the woman hit Allie, she came over and smacked her as well.

The incident in a mall parking spot began minutes before. Taylor McFadden was at the wheel of her car, her friends, Tatum and Allie, were outside smoking cigarettes.

"I noticed the car in my rear view mirror waiting for my spot. I had the passenger window down so I said to Allie let them know I am not coming out yet so they don't have to wait," said McFadden.

The other car parked a few spots away, but apparently the two women who got out were angry. First, there were words exchanged then fists. Taylor called 911 and then got out of the car to help Allie.

"I was like 'Stop! Get off of her,' and I told the cops to hurry up," said Taylor. "Someone grabbed my face and pushed my face back and I got hit on right side of my face."

Taylor said she was trying to protect herself when the other woman kicked her full force in the face.

All three teens have been diagnosed with concussions. Red marks and early bruising have dissipated.

The girls said their assailants were African American, and most troubling for Taylor, who is bi-racial, is what one of the attackers repeatedly said during the attack.

The girls said a number of bystanders came to their aid.

The two women fled, but not before Taylor was able to get a partial license plate number.