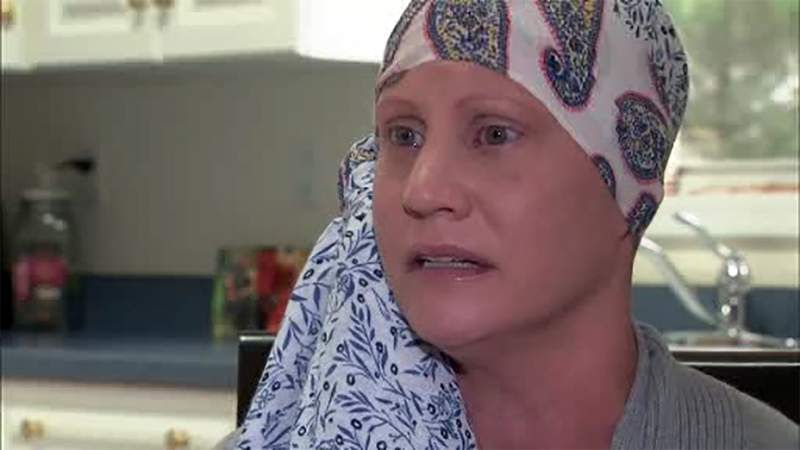 EATONTOWN, New Jersey -- A stage two breast cancer patient is suing the New Jersey Motor Vehicle Commission over what she calls humiliating and discriminatory treatment while attempting to update her driver's license.

Jennifer Giordano has undergone eight rounds of chemotherapy and has lost her hair as a result. Because of that, she was wearing a scarf known as a "chemo cap" when she went to the Eatontown MVC to update her address on June 14.

"Pretty much the first thing out of my mouth was, 'Do I have to take a new picture,' and she said yes," she said. "I said, 'Well, I'd rather not. I have breast cancer. I'm going through chemotherapy, and I'm bald."

She claims she was confronted by an employee who repeatedly demanded that she "take that thing off," despite attempts to explain she was wearing the head wrap to deal with the effects of her treatment.

"You have to take that thing off,' is what she said to me," she said. "So I started crying."

She says it was about 10 minutes before another employee intervened and allowed her to use the picture on file, but not before a roomful of strangers saw her reduced to tears.

"I had people come up to me, saying, 'I think it's disgusting how they're treating you, I can't believe it,'" she said. "Obviously other people witnessed it."

According to a New Jersey law that went into effect in 2016, she didn't have to take a new picture because of her medical circumstances. But the employee she was dealing with didn't know that, and she said no effort was made to accommodate her.

"The treatment Jennifer received at the MVC was appalling and illegal," her attorneys said in a statement. "Breast cancer is a disability under the law, and the MVC should not have harassed our client in this way, especially when the remedy -- to use her old photograph -- existed."

The lawsuit seeks to have the MVC adopt policies and train its employees to ensure that other individuals in similar situations are never treated this way going forward. She is also suing for damages.

"When fighting a potentially deadly disease, no person should ever be treated as I was by the MVC," Giordano said. "I am hoping this lawsuit will result in the department taking the needed steps to ensure no one is ever made to feel as I did."