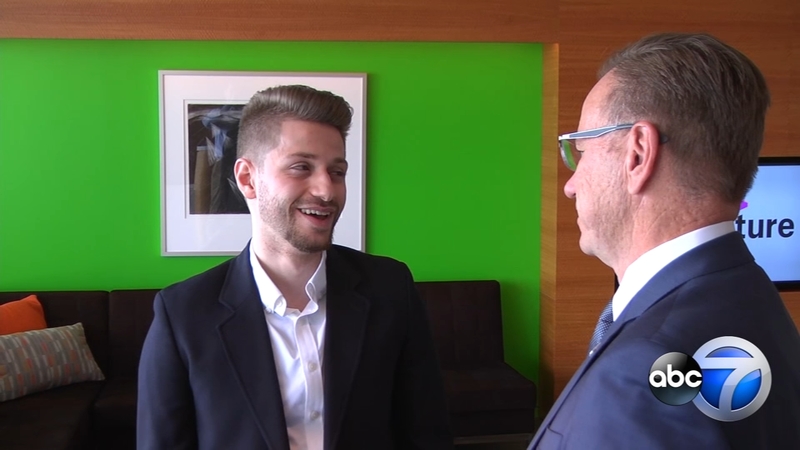 CHICAGO (WLS) -- There's a growing jobs pipeline for associate degree graduates in Chicago thanks to custom-made apprenticeship programs created by local companies and the City Colleges of Chicago.

"We're relying on City Colleges to provide a core curriculum and the students come in with a core understanding in a specialty area that's important and that we want to hire for," explained Accenture Chicago senior managing director Jim Coleman of the partnership.

He said this arrangement is good business, helping bring forward talented candidates who are sometimes overlooked because they aren't pursuing 4-year degrees or because they may be switching career fields.

Ahmad Aladawi is one of those individuals. He came to the U.S. from Syria in 2014, having to support his parents and sister.

"I had to work multiple jobs 7 days a week," Aladawi said of his early years in Chicago.

He juggled that with learning English at Chicago's Wright College, then added on classes for an associate degree there; that lead him to Accenture's apprenticeship program.

"It's allowed me to convert my education knowledge to industry skills," he said of the program benefits.

Now Aladawi's a full-time Accenture employee on the Enhanced Data Protection team, with plans to eventually pursue a master's degree.

This innovative recruiting strategy goes beyond Accenture's walls. In 2017 the company teamed up with Aon to create the Chicago Apprentice Network, hoping to transform the broader business community.

"How do you contribute? Do you have the tools and the capabilities to succeed in the role you're in," said Coleman of the hiring process-one that doesn't emphasize education background as much as it does fit.

Accenture has expanded its program across the U.S. and helped bring more than a dozen other Chicago companies, including McDonald's, into the local network.

In today's economy, this isn't conventional wisdom. But a Harvard Business School study supported by Accenture argues that requiring 4-year degrees for some jobs actually makes our economy inefficient because the skills and education levels don't mesh.

Accenture believes the apprenticeships better fit skill sets to jobs. So far 11 of the 13 former Accenture Chicago apprentices have continued on in full-time jobs.

He added that beyond a paycheck, graduates gain a lot from networking.

"Our students get to be a part of that coaching, that guiding, that care," he said.