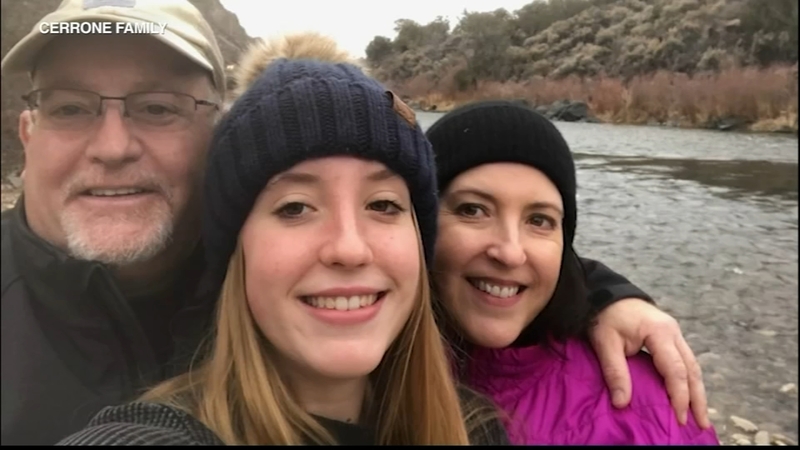 EVANSTON, Ill. (WLS) -- A 16-year-old New Trier High School student died after falling on the third rail of CTA tracks while walking along them with a friend.

Samantha Cerrone and a friend began their walk in the early morning hours of Wednesday morning, a couple blocks south where the Purple Line tracks elevate between Isabella Street and Central Street stations in Evanston.

She slipped and fell on the third rail and was electrocuted. She was pronounced dead a short time later, Evanston police said.

Cerrone's friend tried to pull her off the track, but suffered burn injuries. She was able to call 911 before passing out. Officials said she is expected to be OK.

"I've been in denial that this happened, I still question whether or not she is here," said Mack Smith, Cerrone's friend. "She may be gone from my sights, but she is always in my heart. It hurts."

Smith swam with Cerrone for the New Trier Aquatics Swim Club. Cerrone swam for her high school team as well. Her coach Greg Hartman said she worked extremely hard and called her a tough kid that didn't miss the early morning practices.

"She treated every race like it was the 50 freestyle," he said. "Regardless if it was two lengths or more, nothing fazed her. She was ready to meet her challengers and did it her own way."

Cerrone was killed just hours after she completed her last sophomore year final. Samantha's father said she lived not to be ordinary and encouraged others to have the confidence to do the same.

An only child who lived close to the CTA tracks, her parents said they always instructed their daughter from an early age to never walk along the tracks. Her father wants to get the message out so no one has to go through the same pain.

"Everybody was in a better mood when she was there," Smith said.

"It leaves you speechless, I'm at a loss for words," Hartman said.

Cerrone's family has a visitation planned and are asking that people commit daily acts of kindness in her memory.

The CTA's No. 1 priority is safety, and the agency has taken a number of steps to promote safety and educate customers.

Signage throughout the rail system warns and reminds customers of the dangers of entering the right of way/going onto our tracks. This includes "Danger High Voltage: Keep off the Tracks" sign with photo every 100ft along the tracks. These signs are visible to anyone standing on the platform across the tracks where a person is standing.

And in the event customers at rail stations need to go to track level for any reason (like to retrieve a personal item) they should always contact CTA personnel first to get their assistance.