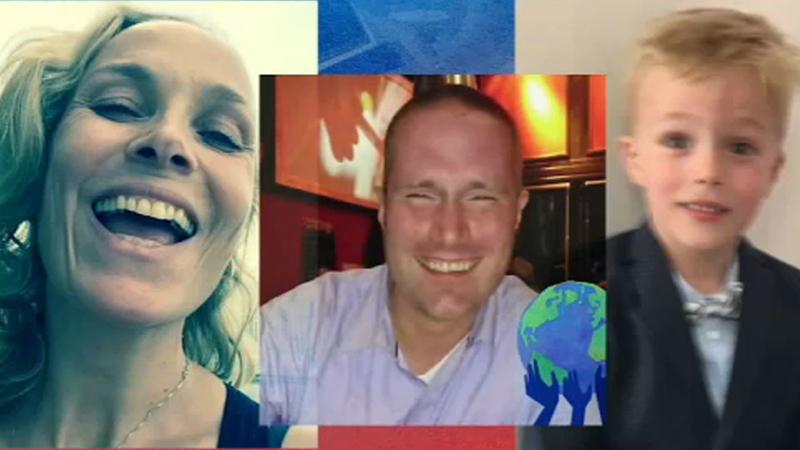 NEW YORK -- A distraught 39-year-old man is believed to have killed his current wife, ex-wife and 6-year-old son in a triple murder-suicide over a custody dispute in Queens.

Police say a housekeeper called 911 from the apartment on 30th Drive near 23rd Street in Astoria after 9 p.m. Monday.

The two dead women -- believed to be his 38-year-old current wife and 47-year-old ex-wife -- and his 6-year-old son were all found shot in the home.

The man, later identified as James Shields Jr., was found in the backyard near the door. Police say he was also shot and his throat had been slashed. A gun was found near his body.

The suspect's father, James Shields Sr., told reporters on Tuesday that his son was in a bitter custody dispute with his ex-wife, Linda Olthof, and that she was taking their son Jimmy to the Netherlands next week. The elder Shields said his grandson was "a beautiful boy" and defended his son as a "good man."

"What we have here is an ongoing case, we believe at this point in time his ex-wife had custody of the child," NYPD Chief of Detectives Dermot Shea said. "There has been some agreement in place where visitations have gone back and forth, where the child would come to the U.S."

Police are also looking into prior 911 calls made from the address.

"We have recovered at this point in time two Glock firearms, we've recovered an additional seven magazines that were fully loaded on his person, and that's over and above that magazines that were in the two guns, so that's an interesting wrinkle in this case," Shea said. "There were approximately an additional 70 rounds and what those rounds were meant for or in case of, may never be known."

Shields indicated in the post that his ex-wife was raising Jimmy in the Netherlands and only wanted him in the U.S. two weeks a year, an arrangement Shields wrote, "I just can't accept as a father."

Shields wrote that his ex-wife had gone back to the Netherlands while pregnant with the boy because she couldn't find work as an artist, causing him to spend "a fortune to travel there" to see his baby. He said the financial stress of their dispute was destroying his life and his second marriage, also to a Dutch woman.

"I had the perfect life a few years ago but it has spiraled out of control," Shields wrote.

The posting was pulled from GoFundMe by Tuesday afternoon.