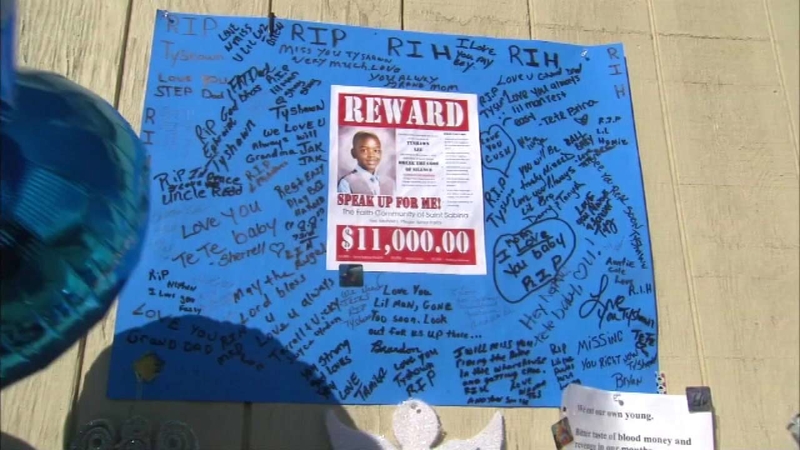 CHICAGO (WLS) -- Police are looking into whether Tyshawn Lee, 9, was lured, targeted and killed in retaliation for several recent gang murders.

The reward offered for information leading to an arrest in Tyshawn's murder jumped from $20,000 to $35,000 Wednesday.

Overnight the boy's mother, Karla Lee, slept near a memorial for her son in the alley where he was shot to death Monday. She was hospitalized Wednesday morning after friends and family persuaded her to get help.

"I just want justice for my son. Whoever knows anything, please let the police know. Please. He was only nine. He didn't deserve this," Lee said.

"She was calling his name, screaming out, calling for Tyshawn to come to her. After so long, she got up and started walking back this way," said Bertha Lee, Tyshawn's grandmother.

The child was shot several times at close range in the 8000-block of South Damen Avenue near his grandmother's house in the city's Gresham neighborhood.

"This person is not an individual. They're not a human being. When you do what you've done to a 9-year-old, there's a place for you. There is no humanity in that place," Mayor Rahm Emanuel said.

Police are asking for the community's help in searching for the offender and are investigating possible motives, including any enemies of his father.

"It's crushing me, I can barely breathe at times when I think about it. I start crying and hyperventilating," said Pierre Stokes, the boy's father.

Stokes says police should focus on finding the killer, not a grieving father.

Friends of the family also want to see the gunman off the streets. Some held up signs all day Wednesday at the busy intersection of 79th and Damen.