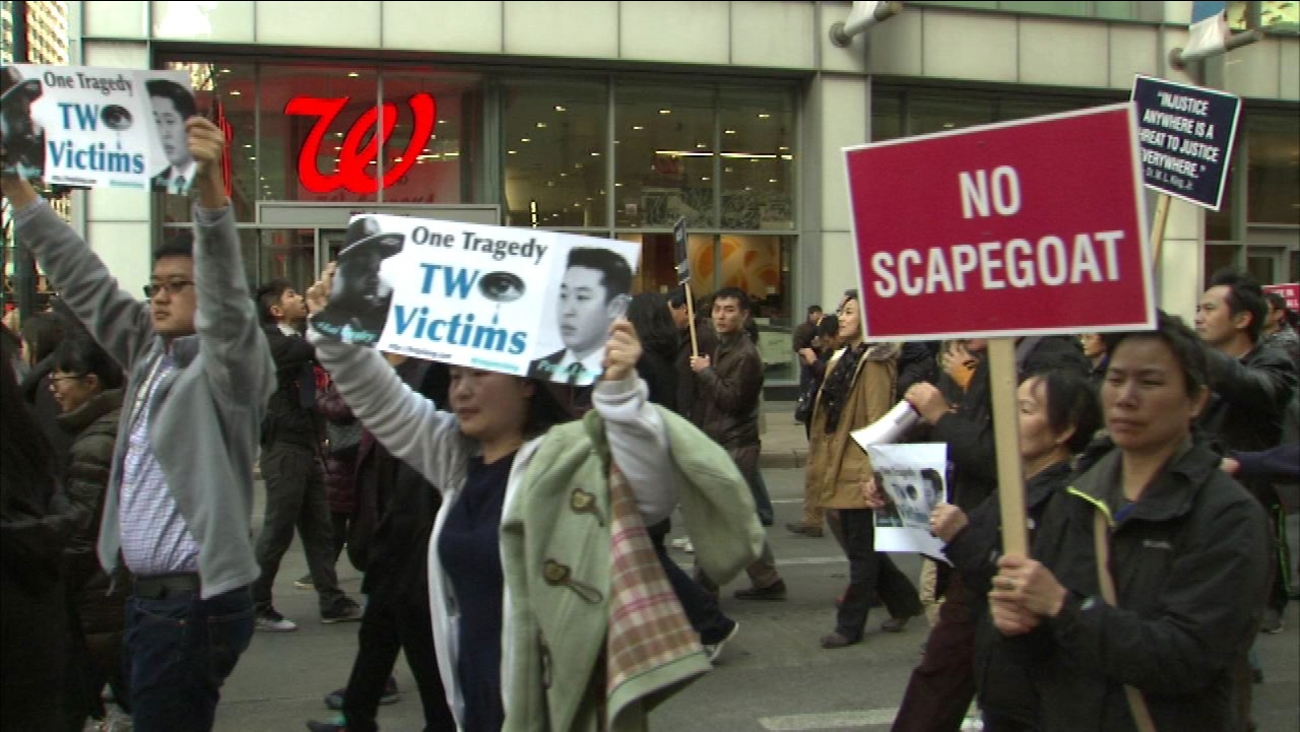 Outraged protesters - many of them Asian Americans - rallied Saturday in the Loop in support of former New York police officer Peter Liang.

CHICAGO -- Outraged protesters rallied Saturday in Chicago's Loop in support of former New York police officer Peter Liang, who was convicted for fatally shooting an unarmed man in a darkened stairwell in a public housing building.

Similar demonstrations took place in New York and around the country.

In New York, about 10,000 protesters, some holding signs and other chanting, rallied in support of Liang. The protest in Brooklyn over ex-officer Liang's manslaughter conviction in the 2014 shooting of Akai Gurley was one of about 30 taking place around the U.S., organizers said. About 2,000 people marched in Philadelphia, according to Philly.com, and about 150 gathered in Ann Arbor, Michigan, according to The Ann Arbor News.

"No scapegoat! No scapegoat!" protesters in New York shouted as the crowd descended on Cadman Plaza, just outside the federal courthouse in Brooklyn. They carried signs declaring Liang's prosecution "selective justice."

The 28-year-old Liang, who was fired immediately after a jury convicted him earlier this month, faces up to 15 years in prison.

He testified that the shooting was an accident, firing his gun after being frightened by a noise. Many of his supporters say they believe Liang is being scapegoated because of anger over other police shootings in New York and across the country and that he has been treated unfairly because he is Asian-American. Prosecutors argued that Liang's actions were reckless and he shouldn't have had his gun out or the finger on the trigger. They also said he did nothing to help Gurley as he lay dying on the floor.

Lee added, "It is a tragedy that Akai Gurley was shot and killed. ... But this tragedy's been compounded by another tragedy, that Peter Liang, in an accident, is going to go to jail for up to 15 years."

A few dozen people held a counter-protest in New York on Saturday, held across the street from the larger protest as officers with plastic handcuffs and batons stood between them.

Soraya Soi Free participated in the counter-protest. She argued that Liang was clearly not a scapegoat because he was tried by a jury of his peers, and she did not approve of the protest supporting him.

"This protest is definitely an insult to Akai Gurley's family," she said.

Liang was convicted Feb. 11 on manslaughter and official-misconduct charges. He is scheduled to be sentenced April 14.

Brown said he is making motions to have the verdict set aside.

Besides the protests in New York, Philadelphia and Michigan, organizers said rallies took place in dozens of other cities in the U.S. Saturday including Los Angeles and San Francisco.