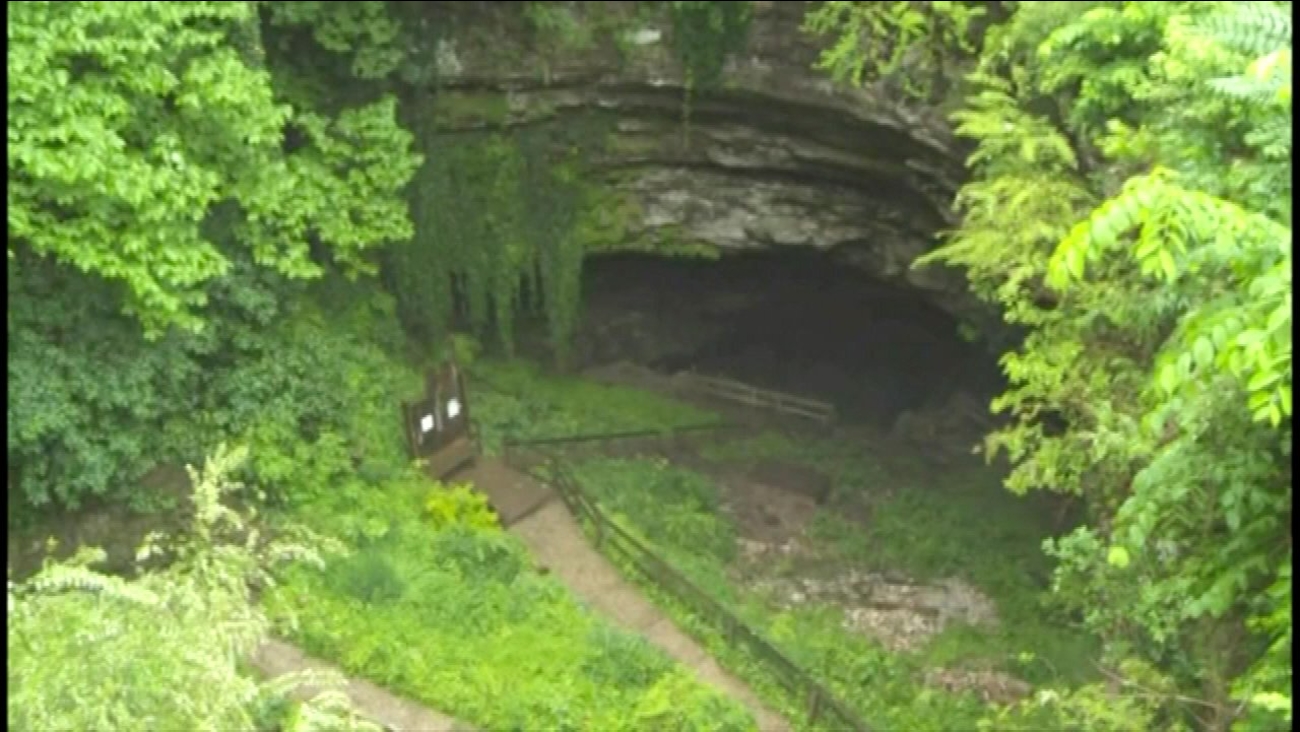 19 people made a harrowing escape from a flooded cave in Kentucky.

AP
HORSE CAVE, Ky. -- One day after 19 people trudged through neck-deep water in a harrowing escape from a flooded Kentucky cave, the operator of the spelunking attraction says he is analyzing the incident for any possible safety lessons.

David Foster, executive director of the American Cave Museum, said he had no way to reach the group of students a mile deep in the caverns Thursday afternoon to warn them that the water was rising and threatening to block their only exit.

Radio frequencies don't reach that deep into the caverns; there are no phone lines to check in. So Foster sped home to get his boots, called 911 and ran into the flooded Hidden River Cave to find them. If he didn't act fast, he thought, the group of guides and college students there on a five-hour tour could be trapped for days until the water receded.

They all made it out safely after navigating deep water, rushing currents and mud so thick it sucked off a police chief's boot.

Now Foster said he's turning his attention to any safety updates that might help prevent another close call.

Four years ago, another spring flood forced Foster to undertake a similar rescue mission. In March 2012, eight students and a teacher on a field trip were deep in the cave when a thunderstorm dumped rain on the area, said Bonny Armstrong, editor of the journal American Caving Accidents, a publication of the National Speleological Society. That group, like the cavers rescued Thursday, had no idea their only exit was being plugged by water.

Foster and another guide went in to rescue them. One canyon, about 1,000 feet into the cave, is particularly prone to dangerous flooding, Foster said. In 2012, the guide tied a rope around his waist, and the students grasped onto it. They walked where they could, but the flood was so deep they sometimes had to swim, Armstrong said. Everyone made it out safely.

Foster said they learned from that experience and built a ladder and cable system in the canyon as an escape route. They used it Thursday, and Foster said it allowed them to traverse the most treacherous part of the cave without incident.

His worry after Thursday's flood is communication. The groups entered the cave around 10 a.m., and when the rain started hours later there was no way to warn them to hurry back aboveground.

Foster is now looking into installing a phone system in the cave, which gets about 15,000 visitors every year and is operated by the nonprofit American Cave Conservation Association. Its yearly budget is about $300,000. Revenue comes from donations, grants and ticket sales for the cave and museum.

Foster's cave is about 10 miles from Kentucky's most famous caverns, Mammoth Cave National Park. Park spokeswoman Vickie Carson said the cave has a hard-wired telephone system. Phones are placed at regular intervals so guides are never far from one.

"We can make plans for safety as best we can," Carson said. "But it's not all under human control. It's a wild place. That's what gives it the sense of adventure."

After the 2012 incident, Armstrong said she recommended stashing supplies in high, dry areas inside the cave so cavers trapped by water can camp until the flood subsides. She repeated Friday that allowing cavers to be temporarily trapped is safer than braving the daring, high-water rescues like the one on Thursday.

Foster said he will consider stashing warm clothes and supplies deep in his cave. But after spelunking there for 30 years, he said he knows the cave and how the water rises in it, and was confident Thursday that he had enough time to get everybody out safely.

People know spelunking holds inherent risks, he said. That's why they descend into a cave in the first place.

"In a world where all the high mountains have been climbed, there are very few wilderness areas left where human beings have not traveled," he said. "Here we're sitting in a small Kentucky town where there are miles of caves that have never been explored, nobody has ever seen them. There are still discoveries to be made."