WLS
CHICAGO (WLS) -- Chicago Police Department Bomb and Arson investigators are looking into a series of suspicious car fires that occurred in the Englewood and West Englewood neighborhoods early Wednesday.

The Chicago Fire Department said reports of as many as 14 car fires - all within a few blocks of each other near California, Ashland and Racine Avenues and 67th and 71st streets - came in between 1:30 a.m. and 7 a.m. Wednesday. No one was hurt, officials said.

Police said someone broke into the vehicles and used an open flame to start the fires. No accelerant was used. 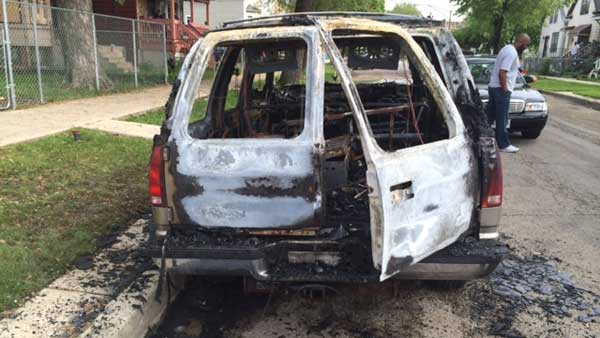 "I just heard some commotion outside, and from there I looked out the window and I see it on fire," said Turhan Ice, a car fire victim.

Ice said that at first he thought that the destruction of the car may have been a personal attack. Then he learned that police are investigating a series of car fires in the area.

"I really don't know how to feel, to be honest. I'm not mad, but I'm kind of disappointed that people are going around and doing stuff so randomly like that," Ice said.

Three cars were set on fire in the block of 68th Street and Marshfield Avenue.

Deaunte Oliver said he was asleep when his girlfriend woke him up to tell him his car had been destroyed.

"I was mad because, who does stuff like that?" Oliver said.

Oliver said he did leave his car unlocked, and now he has to deal with all of the repairs.

"The trunk is messed up, probably have to get a new trunk door, probably need new glass for the car because the windows were busted out," Oliver said. "It's damage that people do not really have time for."