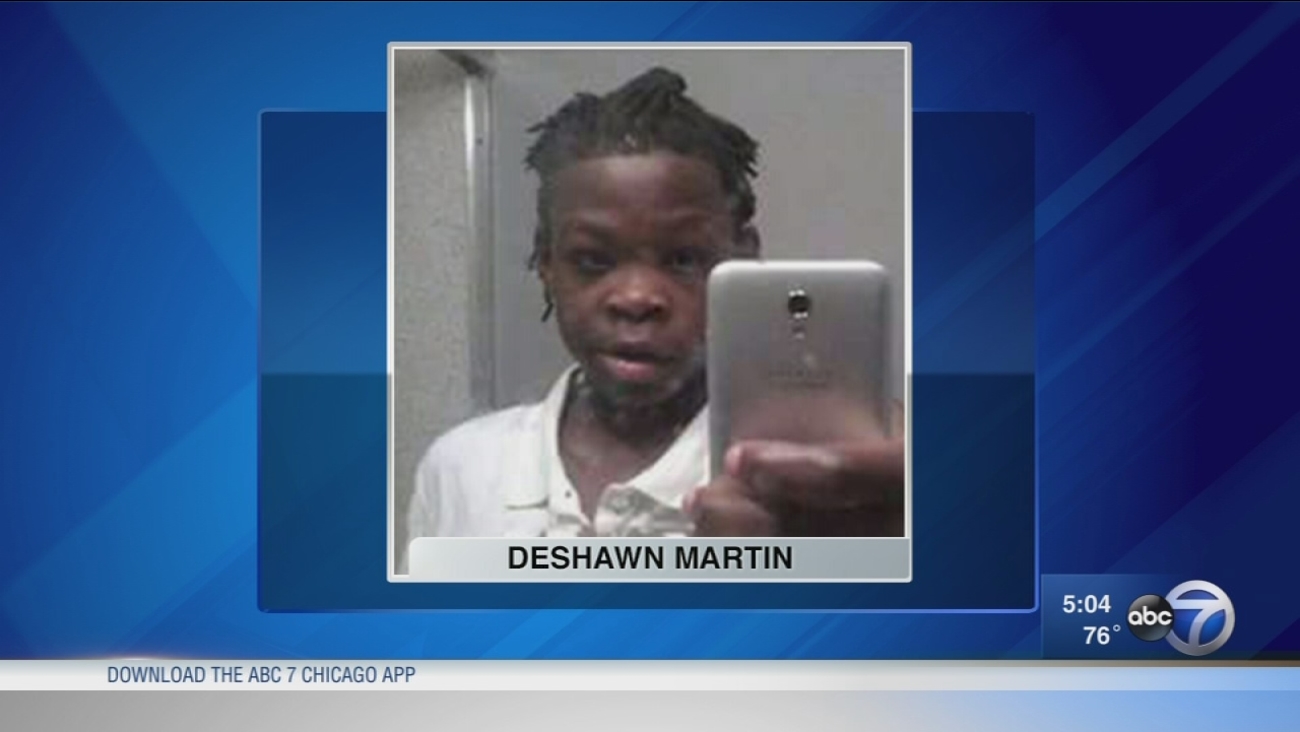 CHICAGO -- Four people were killed, including a 15-year-old boy, and 11 others were wounded in shootings Monday across Chicago.

The boy, identified as 15-year-old Deshawn Martin, was shot to death at 7:35 p.m. in the Washington Heights neighborhood on the Far South Side, according to Chicago police and victim's family. He was in the backyard of a home playing basketball in the 1000-block of 103rd when someone fired several shots, striking him in the chest.

"I'm hurt because I just saw him just a couple hours before, so I'm hurt. I'm praying for his family," said Ms. Johnson, a family friend.

Martin was taken to Christ Medical Center in Oak Lawn, where he was pronounced dead at 9:15 p.m., authorities said. He lived about a block away from the shooting.

Dr. Donovan Price, a reverend with Pray Chicago, met with the family just after the shooting.

"What's happening in Chicago is a terrible thing but it's a spiritual thing for me. It's more than the police can handle, it's more than the mayor can handle," Dr. Price said. "We can't stand alone block by block house by house we have to stand as a city as communities."

The day's latest fatal shooting happened about 10:10 p.m. in the Back of the Yards neighborhood on the South Side. Officers responded to a call of a person shot and found a 23-year-old man lying on the sidewalk in the 5400-block of South Bishop, police said. He had been shot in the head and was taken to Stroger Hospital, where he died. The medical examiner's office has not released the man's name, pending notification of his family.

About 7:55 p.m., a man was in a parked car in the 4800-block of West Gladys in the Austin neighborhood on the West Side when another car drove up and someone inside opened fire, authorities said. The man, thought to be 27 or 28 years old, was shot in the chest and right thigh and taken to Mount Sinai Hospital, where he was pronounced dead. His name has not been released.

Less than an hour earlier, 26-year-old Antone Jackson was gunned down in the South Chicago neighborhood. He was arguing with someone about 6:30 p.m. in the 7900-block of South Ridgeland when the suspect took out a weapon and fired shots, striking him in the body, authorities said. Jackson was taken to Christ Medical Center, where he was pronounced dead at 7:27 p.m. He lived in the same neighborhood as the shooting. Police were speaking with a person of interest Monday evening.

The day's latest nonfatal shooting happened about 10:10 p.m. in the South Side Gresham neighborhood. A 25-year-old man was standing on the sidewalk in the 8500-block of South Carpenter when a male wearing a brown hoodie approached and opened fire, police said. The man suffered a gunshot wound to the right arm and was taken to Christ Medical Center, where his condition stabilized. A second man, 18, was struck in the left leg during the shooting and later showed up at Little Company of Mary Hospital in Evergreen Park, where his condition was also stabilized.

About 10 p.m., a 25-year-old man was shot in the left arm while walking in the 3700-block of West Flournoy in the Homan Square neighborhood on the West Side, police said. The man showed up at Stroger Hospital, where his condition was stabilized.

About 1:20 p.m., a 29-year-old man was shot during a robbery in the South Side Avalon Park neighborhood. He suffered a gunshot wound to the upper left leg in the 7900-block of South Kenwood and was taken in serious condition to Christ Medical Center in Oak Lawn, police said. Police initially said he had died.

About five minutes earlier, a 25-year-old man was shot in the left arm at 1:15 p.m. in the 3000-block of West Arthington in the East Garfield Park neighborhood on the West Side, police said. His condition was stabilized at Rush University Medical Center.

Two men were wounded in a drive-by shooting at 12:41 p.m. in Austin. They were standing outside in the 4900-block of West Adams when a dark vehicle approached and the people inside fired shots, police said. An 18-year-old man was shot in the left foot and a 23-year-old man was shot in the left thigh, police said. Both were in good condition at the scene.

At 10:39 a.m., someone got out of a dark SUV with a semi-automatic handgun and fired multiple times, striking a 26-year-old man in the left thigh while he was standing in the 2500 block of East 78th Street in the South Shore neighborhood, police said. The man was listed in good condition at Northwestern Memorial Hospital.

A 44-year-old man was shot in the buttocks at 6:36 a.m. in the 2800-block of South Springfield in the Little Village neighborhood on the Southwest Side, police said. He took himself to Saint Anthony Hospital, but additional details, including his condition, weren't available.

About six hours earlier, a 34-year-old man was shot and critically wounded in the Lawndale neighborhood on the West Side. He was on a front porch about 12:40 a.m. in the 700 block of South Karlov when he got into an argument with another male, who pulled out a gun and opened fire, police said. The man suffered a gunshot wound to the groin and was taken in critical condition to Mount Sinai Hospital.

Monday's first shooting happened about 12:35 a.m. in the West Town neighborhood. A 13-year-old boy was walking in the 1800-block of West Maypole when a black vehicle drove by and someone inside fired shots, police said. The boy was shot in the left leg and taken to Stroger Hospital, where his condition was stabilized.

The day's shootings followed a weekend in which four people were killed and at least 42 others were wounded in shootings across Chicago between Friday evening and Monday morning, including the incidents on Maypole and Karlov.