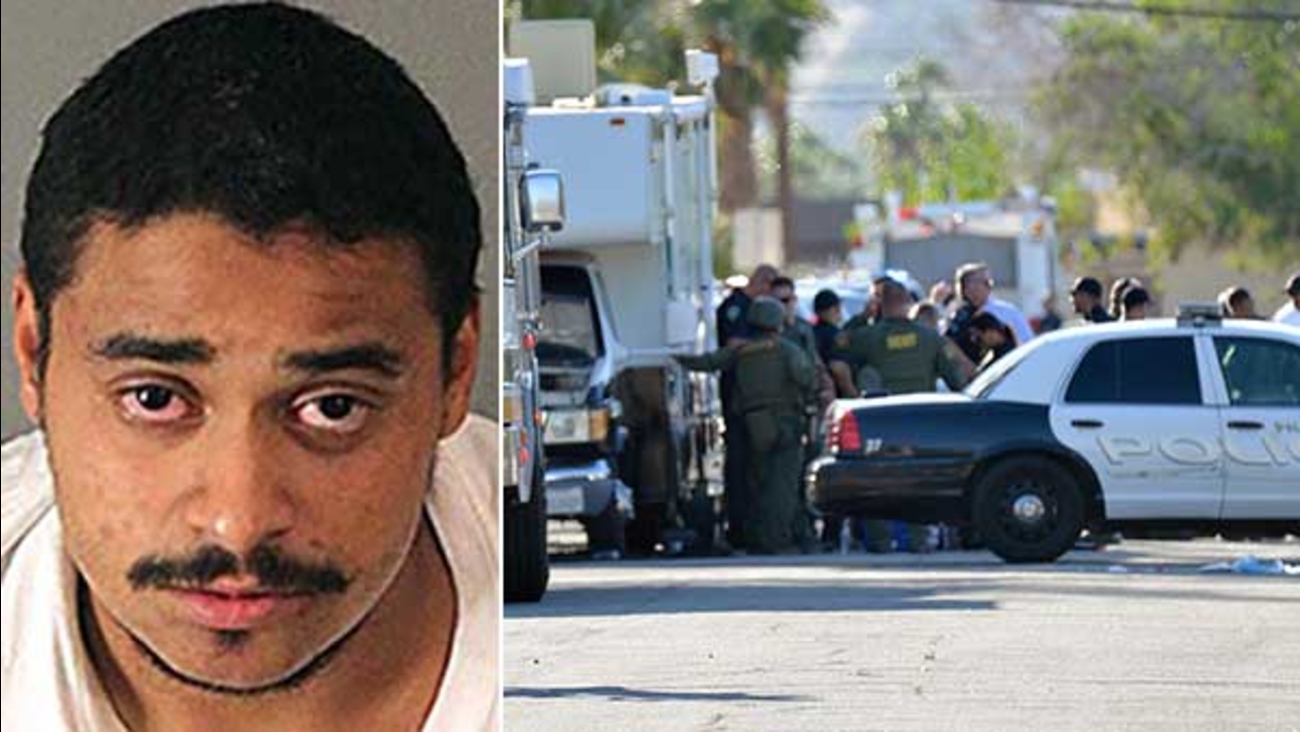 PALM SPRINGS, Calif. -- A 26-year-old man is being held without bail and will be charged later this week in the shooting deaths of two police officers in Palm Springs, Calif.

The Riverside County Sheriff's Department identified the suspect as John Felix of Palm Springs. Felix faces two counts of murder of a police officer with special circumstances, among other charges. He could face the death penalty.

It was an emotional Sunday night at the Palm Springs Police Department as the community, family, friends and department honored two fallen officers.

With candles and flowers, mourners paid respects at a growing memorial in front of the police department. While many never knew Officer Jose Vega and Officer Lesley Zerebny, others had worked by their sides.

Palm Springs officers Jose Gilbert Vega, 63, and Lesley Zerebny, 27, are shown in photos during a press conference on Saturday, Oct. 8, 2016.

Retired officer Marc Melanson said Vega, 63, who went by the nickname Gil and was a kind and dedicated person to work with.

"Gil was extremely dedicated to the job, loved coming to work and was always pleasant. Everyone around him was always so much happier to be around him," Melanson said.

Vega's love for his job and his family was part of the focus of the memorial. Some of his family members, including his daughter, nephew and grandson, spoke during the vigil. He left behind his wife and eight children.

"He loved me no matter what. He would hug me every time he would see me, and it's a shame that he is gone. I can't believe somebody could take his life," Ricardo Hinojoso said.

"To witness her husband in full Riverside County Sheriff's uniform, because he's a deputy sheriff, kiss her on the forehead for the last time, it's tough," said Palm Springs Police Chief Bryan Reyes in tears.

Investigators said the 35-year veteran was the first one to walk up to the door when three officers responded to a family disturbance call on Saturday. Palm Springs Police Chief Bryan Reyes said a woman had called police at about 12:18 p.m. to report that her son was causing a disturbance in the 2700-block of Cypress Road.

Authorities said Felix would not open the door and threatened to shoot the officers. He then allegedly opened fire from inside his house, killing Vega and Zerebny. A witness at the scene said he heard at least 100 shots.

Palm Springs Police Chief Bryan Reyes provided details on a shooting that left two officers dead and one injured in the area.

SWAT officers surrounded the home after Felix barricaded himself in as the quiet neighborhood was sealed off. Several residents in the area were evacuated due to the situation.

Authorities used robots to breach the front door of the home and later announced Felix was in custody about 12 hours after the initial shootings. Authorities said he came out wearing soft body armor and carrying ammunition.

Police robot just rolled right past media and into scene. One of the strangest things I've ever seen. pic.twitter.com/FgbHKiTiag

Felix suffered non-life threatening injuries and was taken to the hospital. The investigation was turned over to the Riverside County Sheriff's Department

The third officer was also wounded in the shooting. Reyes said the officer was alert and providing investigators with more information on the situation. He was released from the hospital Sunday evening and is recovering at home.

The two officers were on opposite ends of their careers as Vega was set to retire in December and Zerebny had spent about 18 months at the department.

The 27-year-old officer had just returned from maternity leave. Zerebny is survived by her husband, a Riverside County sheriff's deputy, and their 4-month-old daughter.

The shooting happened just three days after Sgt. Steve Owen, a popular sergeant with the Los Angeles County Sheriff's Department, was shot and killed while responding to a burglary call in Lancaster.