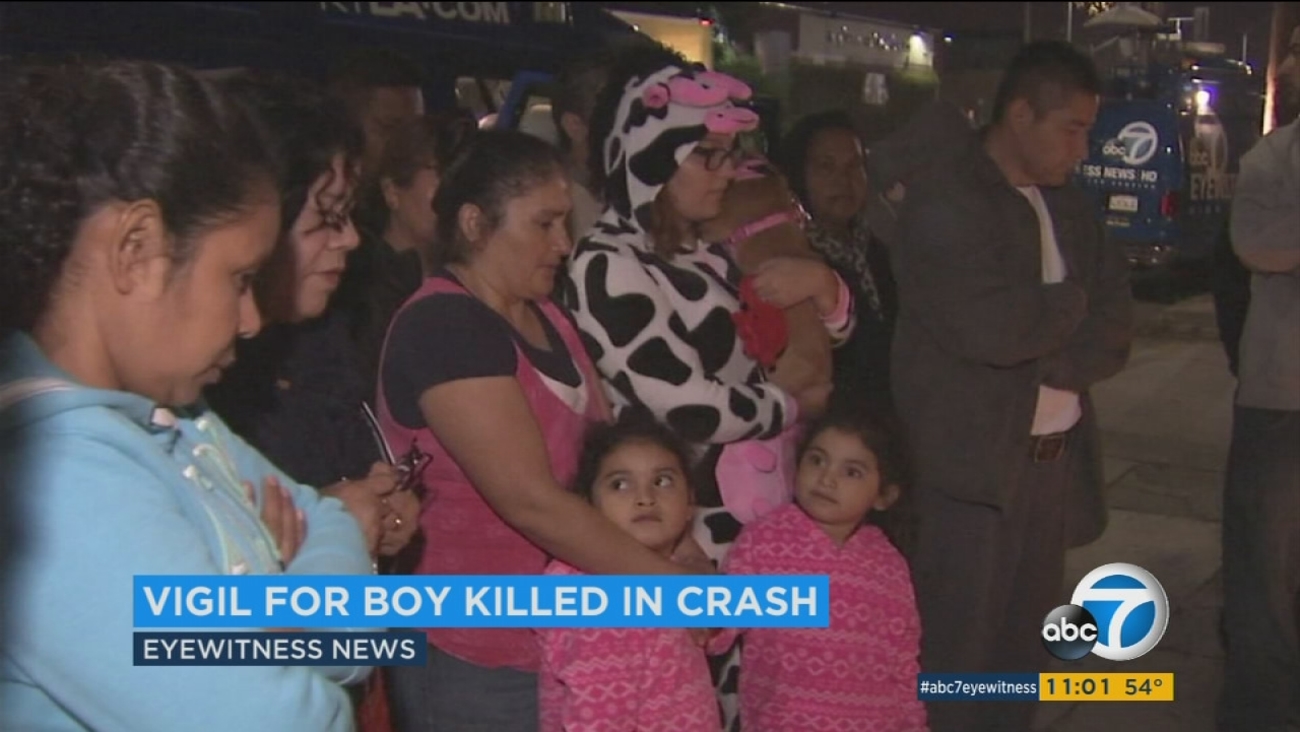 A vigil was held for a 4-year-old boy who died when a suspected drunk driver crashed into his South Los Angeles apartment. (KABC)

SOUTH LOS ANGELES -- A 4-year-old South Los Angeles boy was killed Thursday morning when a suspected drunk driver crashed into his apartment, pinning him and his parents under the car.

Authorities said the crash happened around 12:17 a.m. in the 2800 block of Central Avenue. A female driver headed northbound on the road.

She told police that she swerved to avoid a car that cut her off and crashed into the apartment building, careening through the bedroom and pinning the sleeping family.

A letter to Santa Claus written by the young boy was found amid the rubble. He had asked for a bicycle.

A letter written by the little boy who died was found in the rubble of his family's apartment.

Neighbor Maritza Garcia said she felt and heard the crash, and immediately rushed to help.

"You would think that it was an earthquake and the ceiling would come down," Garcia said. "I was one of the first ones in the front, trying to help the kids out. They were screaming, 'My mom! Help us!'"

First responders at the scene described chaos and panic when they arrived. The mother was stuck under debris after the impact threw her across a room and against a wall. She was screaming for her children.

The father was able to communicate with crew members while under the car. When authorities got the car off the father and pulled him up, they found the little boy underneath. Police believe the child suffocated.

Vigil is just about to start for a 5 yr-old boy killed when a vehicle crashed into his apartment. Live at 7pm @KDOC @ABC7 #SouthLA pic.twitter.com/T3T2s3yMqi

"It's just senseless loss. That's all I can say about that. There's really no reason or justification for this type of stuff," LAPD Sgt. Rafael Quesada said. "We really, really, really need to look into our hearts and be responsible about our partying, our drinking, our driving."

A 6-year-old and two teenage girls, who were all in another part of the home, only suffered minor injuries, authorities said. All of the family members were taken to LAC+USC Medical Center, where the little boy died. Los Angeles fire officials said the parents were in serious condition.

The woman, who authorities said "reeked of alcohol," was arrested on suspicion of gross vehicular manslaughter. She was identified as 23-year-old Vrenda Moreno, of La Puente.

A 4-year-old South Los Angeles boy was killed Thursday morning when a suspected drunk driver crashed into his apartment, pinning him and his parents under the car.

Authorities also obtained video that shows a second car, a dark-colored four-door Saab, near the area before the crash. They will be studying the video to find out what role the car played in the crash.

A makeshift memorial was created in front of the victims' apartment. George Dominguez was among those who left candles and flowers at the site.

"Nobody deserves to go through that," he said. "Just to think that people are driving drunk and not knowing what could happen. This little boy's not going to have a Christmas just because somebody decided to get behind the wheel drunk."