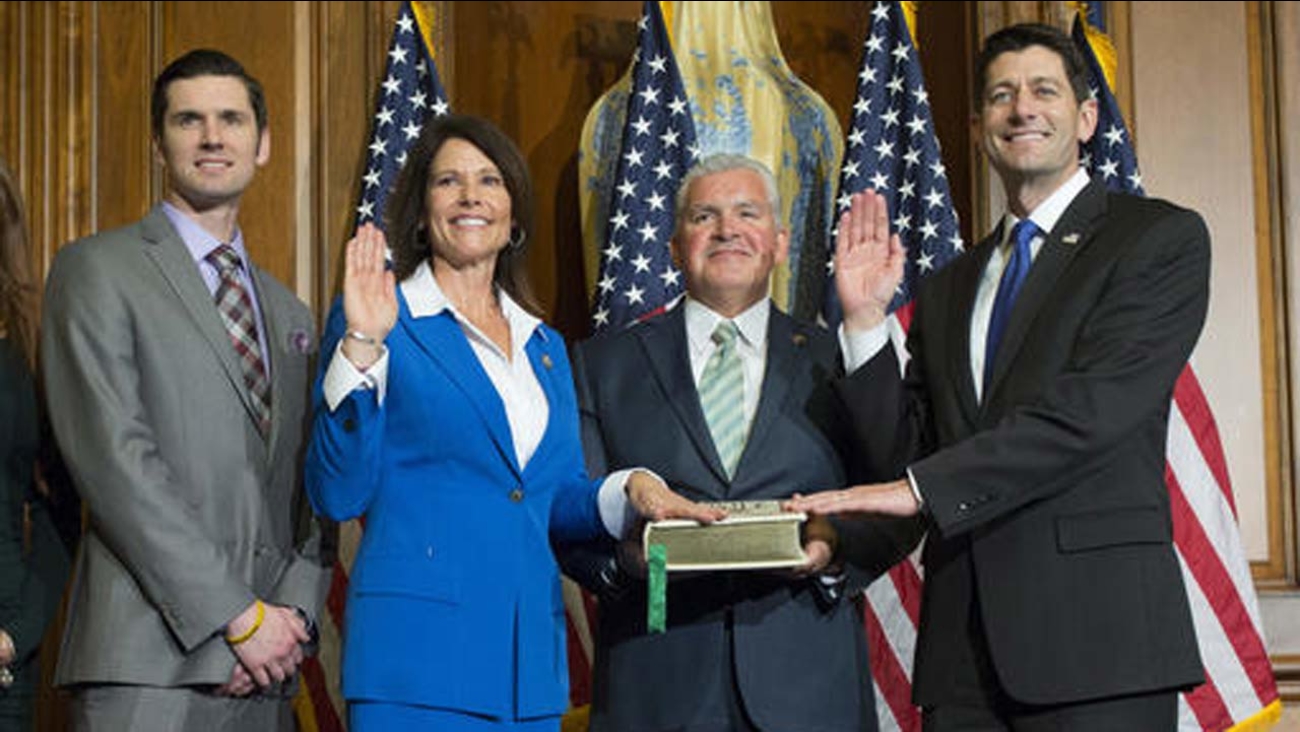 House Speaker Paul Ryan of Wis. administers the House oath of office to Rep. Cheri Bustos, D-Ill., during a mock swearing in ceremony on Capitol Hill in Washington.

MOLINE, Ill. (WLS) -- Illinois Governor Bruce Rauner already has several Democratic challengers for the 2018 election, but Congresswoman Cheri Bustos will not be among them.

Bustos, who has represented the 17th Congressional District in Illinois since 2013, released a statement Monday saying she would not be running for governor.

The congresswoman said she was thinking about a run, but an opportunity to join the Democratic House Leadership led her to decide to remain in Congress.

Democratic businessman Chris Kennedy, son of the late U.S. Sen. and Attorney General Robert Kennedy, and Alderman Ameya Pawar have both announced their candidacy for governor.

You can read Bustos's full statement below:

"I have always said that I want to be in the best position to help as many Illinoisans as I can. Over the last few months, I've given a lot of thought to whether I can make the biggest difference in Washington or in Springfield. Right now, too many hardworking families are suffering because of failure and dysfunction in both of those places.

"As I was considering the best way for me to serve, I was given a new opportunity to join Democratic House Leadership as the only Midwesterner sitting around the table. And with that comes the responsibility to serve as a voice for hardworking families from the heartland who feel like they've been left behind.

"Now that we've seen just how reckless, dangerous and divisive President Trump really is, the stakes couldn't be higher for our nation. With my new leadership responsibilities, I have determined the best way for me to continue getting real results for working families across the heartland is by serving in Congress.

"I know the stakes are just as high for Illinois, so I will continue doing my part to hold Governor Rauner accountable for his failed downturn agenda that's hurt our seniors, children and even victims of domestic violence. While the field of Democratic candidates is still forming, I look forward to actively campaigning for, and electing, a strong Democratic Governor who will stand up for all Illinoisans - from Chicago, to Rockford, Moline and Peoria. We have a lot of work ahead of us in the fight for more good paying jobs, better wages and an economy that works for all Americans. I believe I can do the most good for our state and our country by standing up for the values that unite us as Midwesterners."