WLS
By Will Jones, Evelyn Holmes and John Garcia 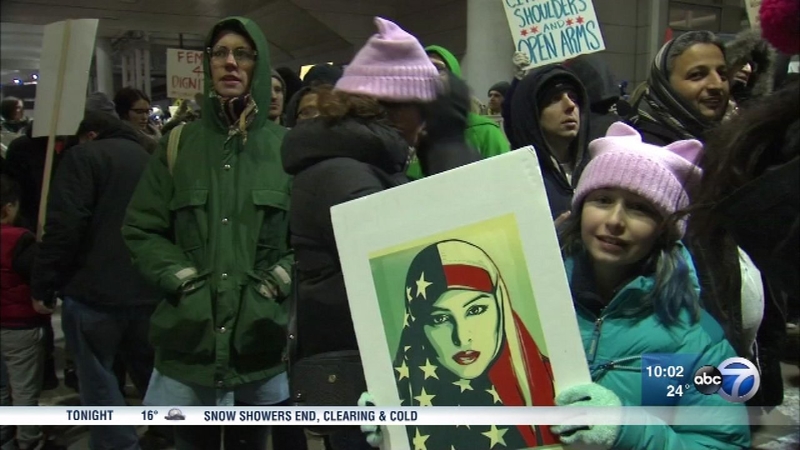 CHICAGO (WLS) -- Protesters took over airports over the weekend after dozens of people were taken into custody while arriving in the United States following U.S. President Donald Trump's executive order on refugees.

In Chicago, 18 people were detained and were being held at O'Hare International Airport Saturday night due to the ban, lawyers said. Thousands of protesters crowded Terminal 5, shutting down all traffic to the international terminal, and called for the release of those detained and an end to the travel ban. Protests continued through Sunday.

Around 9 p.m. Saturday, a federal judge issued an emergency order, temporarily barring the United States from deporting people from nations subject to the ban, saying travelers who had been detained had a strong argument that their legal rights had been violated. Shortly after this announcement, those who were detained at O'Hare were allowed to leave.

The executive order, signed Friday, includes a four month ban on all refugees, with the exception of religious minorities, and a 90-day visa suspension of immigrants and visitors from Muslim-majority countries including Iran, Iraq, Libya, Yemen, Sudan, Syria and Somalia. On Sunday, Trump administration officials said green card holders from those countries would be allowed into the U.S. but would be subject to questioning.

Trump said the ban was needed to keep out "radical Islamic terrorists."

Immigration lawyers arrived at O'Hare and other airports to help those being detained and sent home. Many lawyers said they planned on returning Sunday to continue helping those who need it.

"If this person has a fear of returning to their home country, due process of the law says that they are entitled to a credible fear interview with an asylum officer," said Samantha Lloyd, an immigration lawyer.

"Everybody who was being held last night either had a green card or a visa and in a couple cases they actually were American citizens," said volunteer attorney Richard Goldwasser.

Several groups, including the Muslim Community Center and the Jewish Voice for Peace, organized a rally and march in north suburban Morton Grove on Sunday.

Maria Ulayyet and her sister waited at O'Hare after their Syrian-born aunt, Sarah Alghnimi, was denied entry.

"I just felt hopeless, there was nothing I could do at that point," said Ulayyet.

Using a Syrian passport, Alghnimi flew to Chicago from Saudi Arabia, where she lives, and was detained at O'Hare after arriving on a tourist visa to see her 76-year-old mother, who has just undergone cancer surgery the day before.

"I didn't think that Donald Trump's presidency would affect me in a personal matter this soon, but it unfortunately it did, my whole family," said Judy Ulayyet.

Several groups, including the Muslim Community Center and the Jewish Voice for Peace, organized a rally and march in north suburban Morton Grove on Sunday.

"We have to support each other, whoever is in trouble, Muslims, Mexicans, it doesn't matter," said Sanija Skenderi, a marcher.

Cardinal Blase Cupich called Trump's immigration order "a dark moment in U.S. history" on Sunday. "The world is watching as we abandon our commitments to American values," Cupich said.

Chicago Mayor Rahm Emanuel called on federal government officials to produce a list of names of people detained at O'Hare and Midway and for those people to be released and given legal council.

"Today's actions have tarnished America's standing as a beacon of hope for the free world, and there has been scant credible and confirmed information available throughout the day about the impact of the president's executive order or those detained. Following the stay that was granted this evening, I am calling on the federal government to immediately produce a list of the names of anyone currently being detained at O'Hare or Midway Airports, and calling on those unjustly affected to immediately be released and allowed to access legal counsel," Emanuel said in a statement.

U.S. Senator Tammy Duckworth said Trump's ban jeopardizes the safety of U.S. troops deployed around the world because of the retaliation that may happen.

"Right now our focus is to get American citizens and American green card holders out of detention," Duckworth said.

Governor Bruce Rauner's spokesperson released a statement Sunday night, saying "the Governor has been supportive of tightening the vetting process for Syrian refugees because of ISIS attempts to infiltrate refugee flows, but he's opposed to immigration bans that target any specific religion."

Congressman Danny Davis released a statement Monday saying he was "outraged" by President Trump's executive order and that he condemns it "in the strongest terms."

"This is an action aimed at excluding individuals based on religion and country of origin and does nothing to enhance our security. On the contrary, it will fan the flames of religious bigotry and extremism," Davis said.

There were protests at airports across the country as people voiced their frustration with President Trump's executive order.

TRUMP CALLED FOR REFUGEE BAN DURING CAMPAIGN
As a candidate, Trump called for a temporary ban on all Muslim immigration to the U.S. He later shifted his focus to putting in place "extreme vetting" procedures to screen people coming to the U.S. from countries with terrorism ties.

On Sunday morning, Trump tweeted, "Our country needs strong borders and extreme vetting, NOW. Look what is happening all over Europe and, indeed, the world - a horrible mess!"

Our country needs strong borders and extreme vetting, NOW. Look what is happening all over Europe and, indeed, the world - a horrible mess!

The next group of refugees was due to arrive in the U.S. on Monday, but the official said they would not be allowed into the country.

Trump's order singled out Syrians for the most aggressive ban, ordering that anyone from that country, including those fleeing civil war, are indefinitely blocked from coming to the U.S.

Despite chaos and anger at the nation?s largest airports, U.S. President Donald Trump said the travel ban is working.

The U.S. may admit refugees on a case-by-case basis during the freeze, and the government will continue to process requests from people claiming religious persecution, "provided that the religion of the individual is a minority religion in the individual's country."

During the past budget year, the U.S. accepted 84,995 refugees, including 12,587 people from Syria. President Barack Obama had set the refugee limit for this budget year at 110,000.

According to Trump's executive order, he plans to cut that to 50,000. Refugee processing was suspended in the immediate aftermath of the Sept. 11 attacks and restarted months later.