Man charged in EMT's murder ran her over with stolen ambulance, police say EMT Yadira Arroyo was killed Thursday after she was run over by her own ambulance. Jose Gonzalez has been arrested in her death.

NEW YORK -- A man has been charged after an ambulance stolen in the Bronx Thursday was used to run over an EMT, killing her.

Jose Gonzalez, 25, of the Bronx, was charged with murder, grand larceny and operating a motor vehicle while impaired by drugs.

Gonzalez being escorted from the precinct:
EMBED More News Videos

According to the New York City Police Department, he is an emotionally disturbed person who has had numerous prior interactions with the police. Police confirmed that he does have a criminal history.

As he was escorted by police from the 43rd Precinct early Friday morning, Gonzalez muttered to himself with EMTs silently watching him put into a waiting police cruiser.

"I'm innocent. I didn't do nothing. I'm innocent," Gonzalez said as he was escorted.

Police said the EMT, Yadira Arroyo, 44, who was behind the wheel got out of the ambulance. Then, the suspect apparently got into the driver's seat and started to drive away. Eventually, Arroyo grabbed the ambulance and was dragged; Gonzalez then backed up and ran her over, police said.

The ambulance made a left turn on Watson and crashed into a parked car.

The EMT's partner was not physically hurt. The EMT that was struck was taken to Jacobi Hospital in critical condition, but she later died from her injuries. 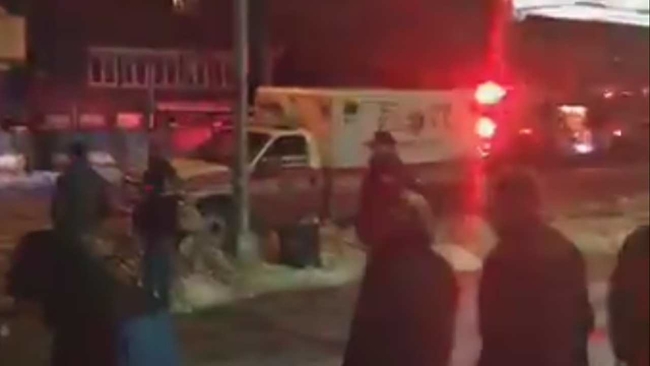